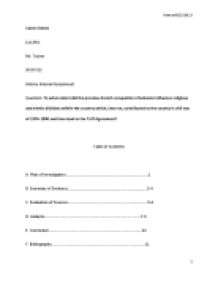 To what extent did the previous French occupation of Lebanon influence religious and ethnic divisions within the country which, later on, contributed to the countrys civil war of 1976-1990 and then lead to the Taif Agreement?

The way the war?s causes were interpreted and explained clearly showing that the writer had experienced it first-hand. This article is slightly biased and sympathetic towards the Lebanese people in general, regardless of their ethnicity. The secondary source The Lebanese Civil War, 1975-1990 written by Samir Makdisi and Richard Sadaka goes into great detail in the internal and external political, social, and economic facts as if they experienced the war first hand. However, this research paper was written 13 long years after the war settled down and ended. This paper was written to explain the details that people ?should? know rather than the ones that could have biases because the authors were not present during the time of the Civil War. The paper also uses many other sources to simply ?soak up? additional information to help explain the facts. This study mainly talks about how the war started in a broader perspective and separates the war into three different phases. This helps the reader understand fully what happened when and why it happened at that time. This source and its authors are extremely informative and do not take side with the countries they have written and explained about. It focuses primarily on the civil war itself and does not stray of that topic. ...read more.

For example, most of the Christian groups either had Syria or Lebanon on their side and most of the Muslim groups had Iran, the Palestinians, or the Lebanese on their side. So this ?civil war? that was caused by religious and ethnic tensions now evolved into a proxy war for the neighboring countries of Lebanon. ?To resolve the internal and external problems the Arab Deterrent Forces (A.D.F.), which consisted of Syria, Saudi Arabia, and Yemen signed the Ta?if Accord which stated that,?[5] ?for a temporary but unspecified period, religious communities would be equitably represented in public employment and cabinet posts (Article 95).?[6] E. Conclusion It can clearly be seen that the divisional religious and ethnic groups where the cause of the war rather than anything else. Each of these sects was either Christian or Muslim. Also, the distribution of power in the political system and the position of power were based on religion which caused many disputes and problems between the Muslims and Christians evidently causing the war. However, after the entire time span of the war the countries on the outside decided to intervene more than they already did during the war after they noticed the population drop. The three countries, Saudi Arabia, Yemen, and Syria decided to make the Ta?if Accord which would provide equality between the Christians and Muslims in the political power and initially bring an end to the war. F. ...read more.