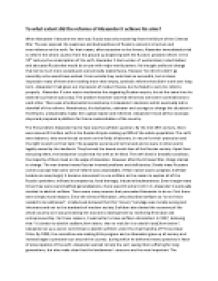 Transfer-Encoding: chunked ﻿To what extent did the reforms of Alexander II achieve his aims? When Alexander II became the new tsar, Russia was only recovering from the failure of the Crimean War. The war exposed the weakness and backwardness of Russia?s economic structure and over-reliance on the serfs. For that reason, after accession to the throne, Alexander immediately tried to reform the whole country from the ground up beginning with the Russia?s greatest reform in the 19th century-the emancipation of the serfs. Alexander II had a vision of westernized, industrialized and educated Russia that would be on par with major world powers. He brought profound change that led to much more socially and economically stable Russia. However his reforms didn?t go smoothly as he would have wished. From outside they could look as successful, but at closer inspection many of them were nothing more than empty, symbolic reforms that didn?t work over long term. Alexander II had given out impression of modern Russia, but he failed to carry his reforms properly. Alexander II?s aim was to modernize the stagnating Russian empire, but at the same time he wanted to preserve autocracy. The problem however was that these two aims were contradictory to each other. There was a fundamental inconsistency in Alexander?s decisions which eventually led to downfall of the reforms. Nonetheless, his dedication, endeavor and courage to change the situation in the Empire, undoubtedly makes him a great leader and reformist. ...read more.

They made the Russian army much more civilized and effective. Despite the army being smaller, due to the shorter military service, the army was much better-trained and altogether stronger. The reforms also considerably reduced government spending on the army. To add to that, the ?new? army was able to defeat Turkey in the Russo-Turkish War 1877-78 and so restored some of Russia?s international reputation that had been lost during the Crimean War. Further reforms were also needed in the legal system. Before the Emancipation Edict, the administration of justice was slow, inefficient, discriminatory and shockingly corrupt. The ?trials? took place in secret, without the presence of the accused, legal representatives or any witnesses. The cases were judged by men without any legal training or experience, purely on the basis of written evidence. Also if the accused was a peasant, they were assumed to be guilty until proven innocent. In 1864 Alexander therefore decided to introduce a modern, Western-style system- an independent judiciary that would be equal for all the subjects. This resulted in introduction of juries and judges, who were well-paid to avoid bribery. The courts were also opened to the public. But most importantly, the fundamental principle that the judiciary would be seperated from the legislative powers and executive authority of the state was established. The legal reforms were Alexander?s most liberal and progressive reforms. This new legal system offered the Russians a chance for a fair trial for the first time. ...read more.

The reforms nonetheless still had some limitations like the government?s taxation policies. The peasants still had to pay high poll tax that the gentry was freed from. In fact, the poll tax rose by more than 80% during Alexander?s reign. On balance, by the financial and economic reforms, Russia made a vital step towards industrialization and economic modernization of the country. However the reforms were unsuccessful in a way that the rate of development was very slow and uneven. Russia still had a long way to reach the economics level of Western powerhouses. Today Alexander II is known as the Tsar Liberator. His enthusiasm and dedication for change will certainly ensure his place in the Russian history books. There is little doubt that the reforms he made, helped to propel Russia into the modern world and stimulated the economy, which was waning before the reforms. Nevertheless, even though some reforms were highly succesful like the military and judiciary reforms, many of them didn?t modernize Russia as they had been expected to. From the outside the Empire could look as modernized, but closer inspection revealed lots of deficiencies and weaknesses. To add to that, instead of stabilizing and strenghtening the government, Alexander?s reforms led to greater political opposition. By the ?middle-path? reforms, Alexander angered both the conservatives and the liberals. Alexander was on the right path. If he wanted his reforms to work properly, he had to undermine the autocracy, which however he wasn?t willing to do. These reforms therefore led to structuring of the society and rise of radical political opposition, which eventually resulted in Alexander?s assassination in 1881. ...read more.