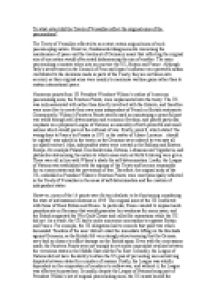 To what extent did the Treaty of Versailles reflect the original aims of the peacemakers?

﻿To what extent did the Treaty of Versailles reflect the original aims of the peacemakers? The Treaty of Versailles reflected to an extent certain original aims of each peacekeeping nation. However, fundamental disagreements concerning the maintenance of peace and the treatment of Germany meant that reflecting the original aim of one nation would often entail dishonouring the aim of another. The main peacemaking countries taken into account are the US, Britain and France. Although Italy?s involvement in the Council of Four and Japan?s influence as a powerful nation contributed to the decisions made in parts of the Treaty, they are not taken into account, as their original aims were mainly to maximise wartime gains rather than to sustain international peace. Numerous points from US President Woodrow Wilson?s outline of American peacemaking aims, the Fourteen Points, were implemented into the treaty. The US was only associated with rather than directly involved with the Entente, and therefore were more free to create their own aims independent of French or British sentiments. Consequently, Wilson?s Fourteen Points was focused on maintaining a peaceful post war world through self-determination and economic freedom, and placed particular emphasis on a proposed League of Nations, an assembly of both powerful and small nations which would prevent the outbreak of war. Firstly, point 8, which stated ?the wrong done to France by Prussia in 1871 in the matter of Alsace Lorraine?should be righted? was upheld in the treaty, as the Germans were ordered to evacuate all occupied territory. ...read more.

In conclusion, the idealism of some of the Woodrow Wilson?s aims meant that they were unsuitable for the treaty, and the conflict in aims between the US and France and Britain also damaged the pursuit of many US aims. The aims of France focused more intently on weakening Germany and restoring a balance of power in Europe, and although these views were not shared by other countries, the major role France played in the development of the war ensure that their aims were reflected in the Treaty. France had been decimated by the war, with 1.3 million casualties and 2.8 million wounded, and was acutely aware of the potential strength that Germany still possessed as a result of the collapse of Austria-Hungary and Tsarist Russia. The French Premier Clemenceau wanted to make Germany pay for the damage she had caused in the war, and permanently weaken her in order to ensure that Germany could not start conflict again. France?s original aims were reflected in the Treaty of Versailles in numerous ways: Germany was ordered to disarm immediately and to a point where only internal security was could be managed. The Germans were forbidden to have submarines, tanks or air forces. Also, the French had wanted damages from Germany, and a way to suppress its economy, and demanding reparations was seen as an effective way to obtain both objectives. ...read more.

In conclusions, a number of British aims were reflected in the Treaty of Versailles. However, other British aims directly opposed those of the French. The British were far more sympathetic to Germany, and unlike France, recognized the advantages a cooperative and appeased Germany could bring. Britain wanted a peaceful united Germany which could act as a barrier to the spread of Bolshevism in the East and eventually develop a market for British goods. Lloyd George, the Prime Minister, wanted to avoid the annexation of German minorities in the newly formed independent states, as he feared this would create the bitterness which could spark a new war in the future. This approach was met by direct opposition from the French, who wanted to inflict maximum penalties on Germany. Consequently, the Treaty of Versailles was much harsher than the British intended, and did not sustain the general attitude of reconciliation that reflected the aims of the British, but also reflected the aims of the French who were seeking revenge. In conclusion, the Treaty of Versailles did in its entirety reflect many of the aims of the peacekeepers. However, the fundamental differences in ideologies and attitudes towards Germany and its place in international relations meant that often in reflecting the aim of one nation another nation?s aim would be disregarded. Also, despite the inclusion of a country?s aims in the treaty, flaws and loopholes often meant that these aims were unenforceable, reflected in France?s failure to obtain reparations from Germany. Therefore, the Treaty of Versailles, to an extent, managed to reflect only partially the original aims of the peacekeepers ...read more.