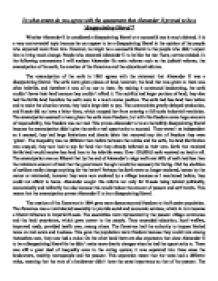 To what extent do you agree with the assessment that Alexander II proved to be a disappointing liberal?

This means that the emancipation proves Alexander II to be a disappointing liberal. The creation of the Zemstvos in 1864 gave more democracy and freedom to the Russian population. The Zemstvos was a rural elected assembly to provide social and economic services, which in turn became a liberal influence in imperial Russia. The assemblies were represented by the peasant village communes and the land proprietors, which gave power to the people. They expanded education, local welfare, improved roads, provided health care, among others. The Zemstvos had the authority to impose limited taxes on real estate and business. This gave the population more freedom because they could vote among themselves now, they now had a voice. On the other hand there are also arguments that show Alexander II to be a disappointing liberal for he didn't make more drastic changes when he had the opportunity to. There was still a great deal of inequality even in the voting system; it was separated into three areas the landowners, wealthy townspeople and the peasant. This separation meant that the votes had a different value, meaning that the vote of a landowner didn't have the same importance as that of the peasant. ...read more.

Secondary education was also available, however this was very 'dangerous' for the Autocratic system. It was unsafe because if people were given superior education they would start inquiring whether Russia's system was adequate. He was also more liberal for allowing the universities to present lectures on topics concerning law and government. This was an extremely good reform because education was no longer available only for the rich; the peasants had better opportunities due to this reform. It also created a more liberal mindset in the students, because they were allowed to express their opinion without having the fear of being persecuted. To conclude I believe Alexander II proved to be a 'disappointing liberal' up to a certain extent because we must also take into account that the education and judicial reforms restored a significant amount of equality in Russia. However I do deem that Alexander could have achieved more than what he did, he could have promoted more equality through more effective reforms. Alexander could have made some of the existing reforms more significant by giving the peasants a more significant role. He should have made reforms that would have optimistically affected the grand majority of the population, not only the nobility. ?? ?? ?? ?? ...read more.