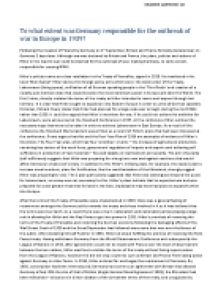 To what extent was Germany responsible for the outbreak of war in Europe in 1939?

﻿SHARON ADEWUSI 12I To what extent was Germany responsible for the outbreak of war in Europe in 1939? Following the invasion of Poland by Germany on 1st September, Britain and France formally declared war on Germany 2 days later. Although war was declared by Britain and France, the plans, policies and actions of Hitler in the road to war could be blamed for the outbreak of war, making Germany, to some extent, responsible for causing WWII. Hitler?s policies came as a clear retaliation to the Treaty of Versailles, signed in 1919. As mentioned in his book ?Mein Kampf? Hitler laid out his foreign policy aims which were: the destruction of the Treaty, Lebensraum (living space), unification of all German speaking people in the ?Third Reich? and creation of a racially pure German state that would become the most dominant power in Europe and later the World. The first 3 aims, directly violated the terms of the treaty as Hitler intended to rearm and expand through lost territory. It is clear that Hitler sought to expansion into Eastern Europe in order to unite all German speakers. Historian, Richard Overy states that Hitler had planned for a large scale war to begin during the mid 1940s rather than 1939. ...read more.

In 1934, Hitler ordered for and began the rearmament of Germany. By 1936, conscription had been reintroduced; Germany had come to an agreement with Britain that allowed Germany a fleet 35% the size of that of Britain (Anglo German Naval Agreement 1935); the Rhineland had been militarised ? all actions in direct violation of the armament terms of the treaty, and unopposed by Britain and France, with Britain assisting the violation in the case of the Anglo Naval Agreement. Hitler broke another term of the Treaty in 1938 by forming the Anschluss (union) with Austria, in accordance to his policy and aim of uniting all German speakers into a Greater Germany. Hitler?s violations of the terms could be seen as aggressive and indicators of his preparation for war, however although he was openly violating and reversing the terms of the Treaty, neither Britain nor France took any action as they had opted for a policy of appeasement. It could be argued that the policy of appeasement played a large role in causing war, or at least allowing Hitler to get Germany to the point where she was now a threat to the rest of Europe. ...read more.

In conclusion, Germany was responsible for the outbreak of war in 1939 to an extent, but cannot be held solely responsible. Hitler?s aims and policies such as lebensraum and remilitarisation posed a great threat on the other powers in Europe, especially Poland. From the Hossbach memorandum and four year plan, it is clear to see that Hitler intended for war, but the declaration of war by Britain and France in 1939 was premature to what he had expected. However, though Hitler had planned for war, he did not necessarily cause it. The policy of appeasement played a great role in escalating the road to war. The inaction of Britain and France allowed Hitler to do as he wished and gave him the confidence that he would be able to invade Poland unopposed. Britain and France could have prevented the war or delayed it by stopping Hitler from violating the terms of the treaty of Versailles. It could also be argued that the Treaty held great significance in causing the outbreak of war. AJP Taylor argues that the treaty did nothing to crush the expansionist ambitions of Germany, which Hitler pursued in his policies and actions that eventually led to the declaration of war. ...read more.