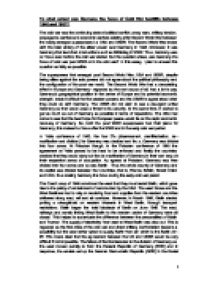 To what extent was Germany the focus of Cold War hostility between 1945 and 1961?

To what extent was Germany the focus of Cold War hostility between 1945 and 1961? The cold war was the continuing state of political conflict, proxy wars, military tension, propaganda warfare and economic warfare existing after Second World War between the newly emerged superpowers i.e. USA and USSR. The Second World War ended with the total victory of the allies' power over Germany in 1945. Moreover, it was Germany that launched most actions such as Blitzkrieg in WW2. Thus, Germany was on focus even before the cold war started. But the question arises, was Germany the focus of cold war post WW2 or in the cold war? In this essay, I plan to answer this question as fairly as possible. The superpowers that emerged post Second World War, USA and USSR, despite being allies against the axis powers did not agree about the political philosophy and the configuration of the post war world. The Second World War had a devastating effect in Europe and Germany- regarded as the root cause of all, had a lot to pay. ...read more.

However, in March 1948, Stalin started putting a stranglehold on western interests in West Berlin, through transport restrictions. Stalin began the total blockade of Berlin on June 1948. The road, railways and canals linking West Berlin to the western sector of Germany were all closed. This helped to accentuate the difference between the personalities of Stalin and Truman. The supply of electricity from east to West Berlin was also cut. This is regarded as the first crisis of the cold war and direct military confrontation became a possibility but the west rather opted to supply Berlin from air; which is the Berlin Air-lift. This made clear that the agreement between the US and USSR would be very difficult if not impossible. The failure of the blockade led to the division of Germany as the west moved quickly to form the Federal Republic of Germany (FDR) and in response, the soviets set up the German Democratic Republic (GDR) in the Soviet occupation zone. Thus, Germany was divided into two countries in the year 1949 and the four-power control of Berlin continued. ...read more.

In 1958, Khrushchev proposed a peace treaty that would recognize the existence of two Germanys. This demand for demilitarization of Berlin and withdrawal of western troops gave rise to the Berlin crisis of 1958.the tension was growing in Berlin and the number of refugees entering west increased. Thus, in August 1961, barbed wire was erected between east and West Berlin which later on took the form known as the Berlin Wall, this stood as a symbol for the division of Germany and also for the conflicting ideas of differencing ideologies, communism and capitalism. Therefore, Germany was the focus of the cold war hostility between 1945 and 1961 as it was the representation of power and the concentration of activities. It was also he hub of conflict between differing ideologies, communism and capitalism and personalities, Stalin and Truman (and later, Eisenhower and Khrushchev; Kennedy and Khrushchev). Berlin blockade and later that division of Germany followed by the creation of Berlin Wall made Germany the peak of ideological differences at this period. Thus, I believe, Germany was the focus of cold war hostility during 1945 to 1961 considering the huge amount of the concentration of activities and conflict in that time period. ?? ?? ?? ?? 1 ...read more.