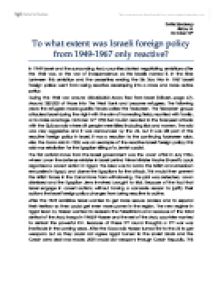 To what extent was Israeli foreign policy from 1949 to 1967 only reactive?

To what extent was Israeli foreign policy from 1949-1967 only reactive? In 1949 Israel and the surrounding Arab countries started negotiating armistices after the 1948 war, or the war of independence as the Israelis named it. In the time between this armistice and the ceasefires ending the Six Day War in 1967 Israeli foreign police went from being reactive developing into a more and more active policy. During the 1948 war around 550-600,000 Arabs fled from Israel (Gilbert, page 47). Around 280.000 of those into The West Bank and became refugees. The following years the refugees made guerilla forces called the fedayeen. The fedayeen groups attacked Israel during the night with the aim of harvesting fields, reunited with family, or to make sabotage. October 14th 1953 Ben Gurion reacted to the fadeyeen attacks with the Quibya raid where 69 people were killed including kids and women. The raid was very aggressive and it was denounced by the US, but it was still part of the reactive foreign policy in Israel, it was a reaction to the continuing fadeyeen raids. ...read more.

(Shulze, page 25) And Nasser did get MiGs. Nasser also decided to nationalize the Suez Canal and to close the strait of Tiran which left Israel with no connection to the red sea. So instead of negotiating the closure of the strait and because of Gurion being outraged about the Czech arms deal Israel decides to engage in the Sevres protocol with France and Britain. France who thought that Egypt was aiding the rebels in the French occupied Algeria wanted to remove Nasser from his powerful position in Egypt. Britain and Anthony Eden wanted Nasser removed because of the nationalization of the Suez Canal and because of Eden's interpretation of Nasser being the new Hitler. Ben Gurion with his aggressive approach had won over the diplomatic Sharett and he agreed to participate in the Sevres protocol. Therefore Israel attacked Egypt October 29th 1956. This action could be seen as a reaction to the Czech arms deal and the closure of Tiran but it was a preemptive attack, and it was Israel who took military in use. ...read more.

The fact that Nasser only asked for partial withdrawal confirms this. Israel chose to interpret this as an act of war and they launched their preemptive attack June 5th1967. This was a very active move and it confirms that Israeli Foreign policy was not reactive. Israel attached so they would not be the ones attacked, so they were not the ones who had to react. Israel's foreign policy started out being reactive with the Quibya and Gaza raid, but as she realized how powerful a military she had the foreign policy became more active with the Lavon affair and the Sevres Protocol. The foreign policy was more reactive than the Egyptian with all the fedayeen raids, but it is wrong to describe it as only reactive. The Sevres Protocol is a really good example of how active the foreign policy was - Israel engaged in covert operations and preemptive attacks. Also during the Six Day War Israel had a very active foreign policy. She attacked first and showed off her military superiority and in this way developed her foreign policy to a more active than reactive one. ?? ?? ?? ?? Emilie S�nderup History HL October 10th ...read more.