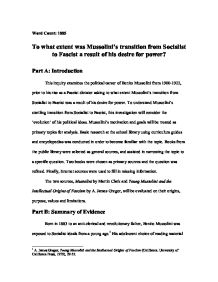 To what extent was Mussolinis transition from Socialist to Fascist a result of his desire for power?

Word Count: 1885 To what extent was Mussolini's transition from Socialist to Fascist a result of his desire for power? Part A: Introduction This inquiry examines the political career of Benito Mussolini from 1900-1922, prior to his rise as a Fascist dictator asking to what extent Mussolini's transition from Socialist to Fascist was a result of his desire for power. To understand Mussolini's startling transition from Socialist to Fascist, this investigation will consider the 'evolution' of his political ideas. Mussolini's motivation and goals will be treated as primary topics for analysis. Basic research at the school library using curriculum guides and encyclopedias was conducted in order to become familiar with the topic. Books from the public library were selected as general sources, and assisted in narrowing the topic to a specific question. Two books were chosen as primary sources and the question was refined. Finally, Internet sources were used to fill in missing information. The two sources, Mussolini by Martin Clark and Young Mussolini and the Intellectual Origins of Fascism by A. James Gregor, will be evaluated on their origins, purpose, values and limitations. Part B: Summary of Evidence Born in 1883 to an anti-clerical and revolutionary father, Benito Mussolini was exposed to Socialist ideals from a young age.1 His adolescent choice of reading material (Marx, Nietzsche, Carlyle, Stirner, Blanqui, Pareto, Kant, Sorel, Hegel) greatly influenced his beliefs, but also confirmed his prejudices.2 Soon after joining the Italian Socialist Party in 1900, Benito was exposed to syndicalist thought.3 By early 1902 he was anti-clerical, anti-monarchial, anti-nationalist, anti-militaristic, anti-reformist and anti-parliamentary; he preached the class struggle and 'the beauty of communal life.' ...read more.

Gregor tries to convince readers that Fascism was not a "synthesis of contradictions" to assist Mussolini in his pursuit of power, but an ideology evolving from Marxism.28 By focusing exclusively on Mussolini's early life this source is apt at addressing the topic of inquiry, Mussolini's early political development. Additionally, Gregor has made Fascism the centre of his research for thirty years, giving him time to formulate informed theories. An extensive bibliography includes the texts of ideologists whom Mussolini himself was influenced by, not just analyses of Mussolini by other writers, giving Gregor an objective idea of Fascism's roots. Speaking to Mussolini's wife, Rachele, afforded Gregor a rare and intimate look at Mussolini. Understandably, Rachele's perspective of Mussolini is fraught with prejudice; her narrative is, however, an invaluable primary source. Frequently referring to obscure thinkers/ideologists, this work is aimed at academics, limiting it's accessibility to most people. Gregor also has well-known opinions about Fascism, many of which are contrary to popular thought; he has argued that Fascism is a left-wing ideology and any connections he draws between Marxism and Fascism should be viewed critically. With his focus on Italian history, Mussolini makes an appropriate addition to the repertoire of works by British authour, Martin Clark. His other books include Modern Italy 1871-1995 and The Italian Risorgimento. Clark was formerly a reader in politics at the University of Edinburgh, Scotland. By examining his personality Clark analyzes the link between Mussolini's character and the way he wielded power. Clark argues that he had the qualities needed to attain power, not to maintain it. ...read more.

Throughout the war "Italian socialism had set it's face against the military as it fought," and as the Fascist squads were "composed in large part of veterans" it was "unlikely that the military would...[defend] the socialists against those...who had fought for the nation."36 In this way Mussolini's military allegiance allowed him to intimidate the Socialists while authorities turned a blind eye. Finally, Mussolini's sudden revocation of his anti-clerical and anti-monarchy views could plausibly be attributed to nothing more complex than his desire to become Prime Minister. There is no evidence that Mussolini suddenly underwent vast and profound ideological transitions that demanded his acceptance of these forces, indicating that Fascism only tolerated influences other than itself (the Vatican and king) in Italy because they enabled it's reign. Significantly Gregor, an avid defender of Fascism's ideological integrity, does not mention this political concession. Part E: Conclusion In his early career, Mussolini's political beliefs underwent a multitude of unexpected revisions. Many of these appeared totally random adoptions and were awkward in synthesis with his other beliefs or former values. The only commonality they shared was that, in one way or another, they assisted Mussolini in his quest for revolution, mass mobilization and power. Syndicalism, pacifism, the class struggle, socialism, anti-clericalism; he casually discarded philosophies that had outlived their use. In light of Mussolini's seemingly opportunistic selection of ideals, it is difficult to say that the perspective championed by Gregor, that Fascism was a sincere and intellectually developed system, can be entirely justified. That his transition from Socialism to Fascism was founded upon aims of revolution and domination, not necessarily coherent political thought, appears much more plausible. ...read more.