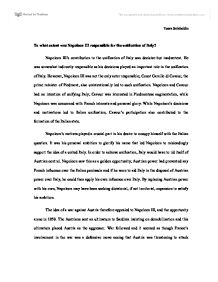 To what extent was Napoleon III responsible for the unification of Italy?

To what extent was Napoleon III responsible for the unification of Italy? Napoleon III's contribution to the unification of Italy was decisive but inadvertent. He was somewhat indirectly responsible as his decisions played an important role in the unification of Italy. However, Napoleon III was not the only actor responsible; Count Camillo di Cavour, the prime minister of Piedmont, also unintentionally led to such unification. Napoleon and Cavour had no intention of unifying Italy; Cavour was interested in Piedmontese augmentation, while Napoleon was concerned with French interests and personal glory. While Napoleon's decisions and motivations led to Italian unification, Cavour's participation also contributed to the formation of the Italian state. Napoleon's motives played a crucial part in his desire to occupy himself with the Italian question. It was his personal ambition to glorify his name that led Napoleon to misleadingly support the idea of a united Italy. In order to achieve unification, Italy would have to rid itself of Austrian control. Napoleon saw this as a golden opportunity; Austrian power had prevented any French influence over the Italian peninsula and if he were to aid Italy in the disposal of Austrian power over Italy, he could then apply his own influence over Italy. ...read more.

Austria was defeated by Prussia and could no longer hold Venice. Prussia had pressured Austria to hand over Venetia to Italy, but Austria refused to do so directly; instead, it handed it over to France in order to humiliate Italy by dismissing it and not recognizing it as a power. It ceded it to France, and Napoleon III handed his acquisition to the Italian government. It was Napoleon's decision to give Venetia to Italy, and this was yet another vital step towards Italian unification. The deterioration of Franco-Prussian relations was another disreputable contribution to Italian unification. War erupted between the two, and Napoleon withdrew his troops from Rome to fight Prussia. France was defeated and the empire collapsed. Napoleon's defeat led the Sardinian King Victor Emmanuel to make military preparations for Rome because French troops were no longer there to control the city. Italian troops entered Rome after the Pope refused to negotiate yet again, and he surrendered. Rome was added to the kingdom and instantly became the new capital. The brief withdrawal of Napoleon III's troops from the city of Rome had involuntarily completed the geographical unification of the kingdom of Italy. ...read more.

Some consider that Cavour played a bigger role in Italian unification than Napoleon III did, but unity would not have taken place if it were not for Napoleon. The French emperor provided Sardinia with diplomatic and military support and without it Cavour would not have been able to defeat Austria in 1859. Napoleon also took part in the cession of Lombardy to Piedmont as he met with Franz Joseph, the Austrian emperor, to negotiate peaceful outcomes; Napoleon had convinced Franz Joseph to give up Lombardy. Napoleon III helped Sardinia acquire Venetia as well seeing that after the Austro-Prussian war, Venetia was handed over to Napoleon who in turn gave it to Cavour. Both Cavour and Napoleon III played crucial roles in the unification of Italy. Austrian influence could not have been eliminated from northern Italy without the massive amount of military aid provided by France. The removal of the French garrison from Rome was not a result of Napoleon's desire to see Italian unification but was rather forced upon him as the Franco-Prussian war broke out. He had helped expel Austria, expand Piedmont, and contributed to the creation the Kingdom of Italy. Cavour was also responsible for Italian unification; had he not unified the northern and southern parts of Italy, the creation of Italy would not have happened. ?? ?? ?? ?? Yosra Salaheldin ...read more.