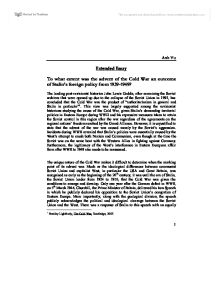 To what extent was the advent of the Cold War an outcome of Stalin(TM)s foreign policy from 1939-1949?

Extended Essay To what extent was the advent of the Cold War an outcome of Stalin's foreign policy from 1939-1949? The leading post-revisionist historian John Lewis Gaddis, after examining the Soviet archives that were opened up due to the collapse of the Soviet Union in 1991, has concluded that the Cold War was the product of "authoritarianism in general and Stalin in particular"1. This view was largely supported among the revisionist historians studying the cause of the Cold War, given Stalin's demanding territorial policies in Eastern Europe during WWII and his repressive measures taken to retain the Soviet control in this region after the war regardless of the agreements on the regional nations' freedom reached by the Grand Alliance. However, it is unjustified to state that the advent of the war was caused merely by the Soviet's aggression. Incidents during WWII revealed that Stalin's policies were essentially caused by the West's attempt to crush both Nazism and Communism, even though at the time the Soviet was on the same boat with the Western Allies in fighting against Germany. Furthermore, the legitimacy of the West's interference in Eastern European affair from after WWII to 1949 also needs to be reassessed. The unique nature of the Cold War makes it difficult to determine when the marking point of its advent was. Much as the ideological differences between communist Soviet Union and capitalist West, in particular the USA and Great Britain, was recognised as early as the beginning of the 20th century, it was until the era of Stalin, the Soviet Union leader from 1924 to 1953, that the Cold War was given the conditions to emerge and develop. Only one year after the German defeat in WWII, on 5th March 1946, Churchill, the Prime Minister of Britain, delivered his Iron Speech in which he publicly declared his opposition to the Soviet Union's occupation of Eastern Europe. ...read more.

However, there is no limit to Stalin's sense of "securing Russia", as Maxim Litvinov, the former Soviet Commissar for Foreign Affairs, told a Western journalist that "Concessions would not pacify Stalin. If the West conceded all Stalin's demands, he would soon come back with another list of demands."11 This view was shared by the West in such influential documents as the Riga Axiom in which Daniel Yergin identified the Soviet Union as a hostile, expansionist power and in the Long Telegram of February 1946 by George Kennan. He again in May 1944 reflected the suspicion that Stalin's policies caused among the Western public opinion: "If it initially successful, will it know where to stop? Will it not be inexorably carried forward...in a struggle to attain complete mastery of the shores of the Atlantic and the Pacific?"12 Such policy of appeasement was once again demonstrated in the event of the Berlin blockade in 1948-1949. The event signifies Stalin's unhesitation to use military measures in his attempt to eliminate the capitalist elements in the Soviet's sphere of influence. Much as the West would resent Stalin's policies for being expansionist and dictatorial, the question is that if the Russians were "the only culprits in the conflict"13, as the writers Zubok and Pleshakov put it? When John Lewis Gaddis, put the responsibility for the advent of the Cold War on the Soviet shoulders, could he himself not have overlooked many of Western acts that preceded Stalin's most aggressive policies of expansion. Having stated the record of Stalin's aggressive policies during the period of 1939-1949, we must not forget that any political decision is a product of interacting internal and external impacts. Stalin's policies were not the exception. Evidence gained during the course of the Second World War revealed that the Soviet leader did not actively seek to antagonise the West. In fact, it is evident that Stalin was driven by the Western policies to deliver his aggressive policies. ...read more.

Through out the years of 1939-1949, the underlying aim of the USA resisting acts against the Soviet was to protect its own economic interest. With the USA's economic capacity, it is easy to put on the mask of the defender of freedom and independence against the evil communism by such appealing economic measures as the Truman Doctrine and the Marshall Plan. Given Russia's shattering economic conditions, it is understandable that repressive actions in Eastern Europe had to be taken to defend communism against the threat of a Western democracy takeover. The Western preoccupation of preventing global Communist spread resulted in its Containment policy, which basically opposed to any Russian opportunity to seize territory such as the Soviet claim to the Black Sea Straits which was referred to as, "an open bid to obtain control over Turkey"22 by Truman. However, the straits were the main gateway for the Soviet trade and taking control of the straits had long been the policy that the Tsars pursued, rather than formed by Stalin's expansionist idea. The West, by its coercive policies towards the Soviet, compelled the Stalin to implement policies that essentially aimed at the Soviet's national security against any future military, economic or political intrusion of the West. Therefore, suspicion and mistrust in the East-West relation was essentially given rise to by the West's policies during the years of 1939-1949. The East-West tension was very much caused by the West's presumption of a Communist monolith that hardly had the opportunity to exist. The advent of the Cold War, therefore, was not caused by Stalin's policies during the years of 1939-1949. Due to various events such as Britain's Appeasement, the delay of the Second Front and the aggressive Western economic policies during these years, Stalin's policies mainly aimed at defending the Soviet Union's existence and ideology against the West's attempt to eliminate it. His policies, if anything, were used by the West as a tool to bring about a conflict with the Soviet Union, or with communism, which poses a threat to the economic interests of the capitalist world. ...read more.