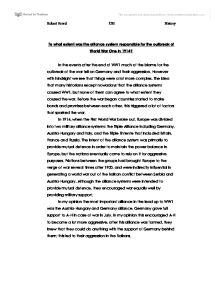 To what extent was the alliance system responsible for the outbreak of World War One in 1914?

To what extent was the alliance system responsible for the outbreak of World War One in 1914? In the events after the end of WW1 much of the blame for the outbreak of the war fell on Germany and their aggression. However with hindsight we see that things were a lot more complex. The idea that many historians except nowadays that the alliance systems caused WW1, but none of them can agree to what extent they caused the war. Before the war began countries started to make bonds and promises between each other, this triggered a lot of factors that sparked the war. In 1914, when the First World War broke out, Europe was divided into two military alliance systems: the Triple Alliance including Germany, Austria-Hungary and Italy, and the Triple Entente that included Britain, France and Russia. The intent of the alliance system was primarily to provide mutual defence in order to maintain the power balance in Europe, but the nations eventually came to rely on it for aggressive purposes. ...read more.

Even though the Triple Alliance broke, and the Triple Entente just settled colonial disputes, especially the Dual alliance as well as the Franco-Russian alliance played a major role for the outbreak of the First World War. Thus, the Alliance System was very much responsible for the First World War. The Dual Alliance between Germany and Austria-Hungary was formed in 1978. The agreement states, that if either of the countries is attacked by Russia, the other will come to its aid with all forces, and if attacked by another country, it will at least stay neutral. This is very significant for the outbreak of the First World War as Austria-Hungary sought Germany's agreement for its declaration of war on Serbia, and further Germanys support in case Russia would attack Austria-Hungary as result of the war with Serbia. Germany promised its support to Austria-Hungary (known as the 'blank cheque') and as a result of Austria-Hungary's declaration of war on Serbia and Russia mobilized. ...read more.

Since Germany did not want to risk a two-front war, it immediately implemented the Schlieffen Plan and declared war on both, Russia and France. Furthermore the Schlieffen Plan violated Belgium's neutrality, as France was to be taken over through Belgium. Therefore Britain got involved, as it had guaranteed the sanctity of Belgium's borders. In conclusion, even though some alliances were weak and ineffective like the Triple Entente, others like the Dual Alliances were more effective. Furthermore the alliances certainly gave Austria-Hungary and Germany, as well as Russia, confidence to threaten and finally go to war. The Alliance System also created military plans like the German Schlieffen Plan, which was developed after the Franco-Russian alliance was signed. The Alliance System was certainly not the only cause of the First World War; there were many others, which altogether led to the outbreak. However, when one sums up all the events, which were due to the Alliance System, I can conclude that the Alliance System was one of the major causes of the First World War. ?? ?? ?? ?? Robert Foard 12H History ...read more.

There are some good points in this answer but overall it lacks depth and range of factors. It is always important in History to offer a balanced analysis - to consider all possible reasons for an event and then weigh up their relative importance before reaching a conclusion.