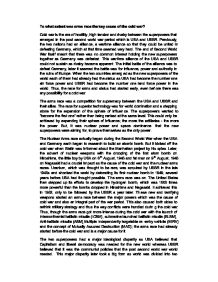 To what extent was the arms race the key cause of the Cold War?

To what extent was arms race the key cause of the cold war? Cold war is the era of hostility, high tension and rivalry between the superpowers that emerged in the post second world war period which is USA and USSR. Previously, the two nations had an alliance, a wartime alliance so that they could be united in defeating Germany, which at that time seemed very hard. The end of Second World War itself meant that there was no common interest holding the new superpowers together as Germany was defeated. This wartime alliance of the USA and USSR could not sustain as rivalry became apparent. The initial battle of the alliance was to defeat Germany, later it seemed the battle was for influence, power and authority in the ruins of Europe. When the two countries emerged as the new superpowers of the world each of them had already had the status as USA had become the number one air force power and USSR had become the number one land force power in the world. ...read more.

on 6th August, 1945 and fat man on 9th August, 1945 on Nagasaki had a crucial impact as the cause of the cold war and the nuclear arms races. Uranium, which was thought to be rare, was acquired by USSR in the late 1940s and shocked the world by detonating its first nuclear bomb in 1949, several years before USA had thought possible. The arms race was on. The United States then stepped up its efforts to develop the hydrogen bomb, which was 1000 times more powerful than the bombs dropped in Hiroshima and Nagasaki. It achieved this in 1952, only to be followed by the USSR a year later. These new and terrifying weapons started an arms race between the major powers which was the cause of cold war and also an integral part of the war period. This also caused both sides to rethink military strategy and thus the way conflicts were handled during the cold war. ...read more.

The arms races in turn, intensified the cold war. Thus, the arms race is a definite cause for the outbreak of the cold war. The superpowers each thought that the other posed a thereat to them. Thus, Arms race was a way for that superpower to be prepared in case the other decided to do anything. The arms race is not only intensified in the nuclear level but also in the space level. There was an incredible technology race going on. The superpowers wanted to prove their supremacy by taking control of the space. The launch of Sputnik and sputnik II by USSR in 1957 sent the Americans to a state of panic as they became convinced of Soviet superiority in missile technology. The US congress and the media promoted this idea of a' missile gap'. Later, the launch of explorer by the United States reconfirms this race for space supremacy. This demonstrates the importance of arms race during cold war. ...read more.