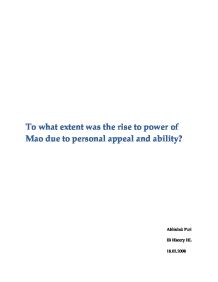 To what extent was the rise to power of Mao due to personal appeal and ability?

To what extent was the rise to power of Mao due to personal appeal and ability? Abhishek Puri IB History HL 18.02.2008 Mao Zedong had mastered the military and political councils of the Chinese Communist Party. He recognized that the peasant majority of China had to be on his side and political emphasis on the countryside was necessary for him to rise to power. Mao and the CCP successfully spread communist ideology outside their southern base with the help of the Long March. His activeness in the political affairs bought him support even from the Kuomintang when both the parties were allied in 1926. Zedong had also developed Guerilla tactics that not only won the Party the fight for power against the Kuomintang when ties between the parties had become turbulent, but also earned respect from the peasants. Therefore, the combination of Mao's popularity with the masses and his tight grip of the CCP helped him to rise to power. The Long March of 1934 marked the time when Mao "achieved effective control of the CCP". ...read more.

He tightened his political grip by the use of his informers and special police. Thus, Mao was able to apply his Sino-Marxist theory especially in the countryside to win support of the Chinese masses in the form of a revolution. Mao believed that a Proletariat was more of a form of attitude than a social class. Adding to this, Mao despised a purely intellectual approach to the revolution because it emphasized theoretical concepts without taking actual account of the conditions in China. He also believed that the peasant rising would be sufficient to the proletariat revolution. Mao and the CCP capitalized on the fact that the Kuomintang's army was treating the peasants in the Jiangxi province badly. He emphasized his loyalty to the peasants by applying the tactics he had learnt in the Jiangxi province, that of waging a Guerilla warfare against the Kuomintang. Mao and the Red Army earned a "Robin Hood" reputation among the peasants as the guerilla fighters paid for their food and lodgings, unlike the GMD who stole it. ...read more.

Mao's moral victory over the Kuomintang by manipulating their strategic failures was the final nail in the coffin for the Nationalists who ultimately fled to Taiwan. In conclusion, it was Mao Zedong's personal appeal which won him a lot of support in the political sphere. By being extensively involved in Party Affairs, Mao was able to showcase his tremendous leadership capabilities. Furthermore, Mao's guerilla tactics not only had a big hand in weakening the Kuomintang's forces but they also won support from the majority Peasant population on which he applied his Sino-Marxist ideals to create a Peasant Run Proletariat. The overwhelming amount of support for Mao generated through the Proletariat and the manipulation of the major tactical flaws of the Kuomintang prevented them to take any further action against the Party. Mao Zedong then went on to become the first chairman of the Communist Party of China in 1943, which was followed by him being named the President of the People's Republic of China in 1958. Thus, Mao's rise to power was due to his personal appeal and his ability to a great extent. ...read more.