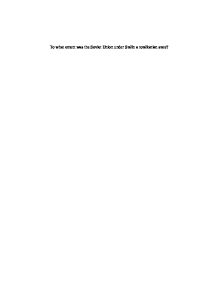 To what extent was the Soviet Union under Stalin a totalitarian state?

To what extent was the Soviet Union under Stalin a totalitarian state? In a totalitarian state, the government is a single-party dictatorship that controls every aspect of the lives of its citizens. Therefore, individual rights does not count for anything and the citizens must obey the government. When Stalin rose to power as the supreme leader of the Soviet Union after Lenin's death in 1924, the state undoubtedly became totalitarian as he was clever in using his power within the Communist Party in which he controlled every aspect of life. One of the ways Stalin strengthened his power over the Soviet Union was through the Purges. In 1934, Stalin used the murder of Kirov, who was the leader of the Leningrad Communist Party, as an excuse to clear out his opponents in the party. Leading figures, such as Kamenev, Bukharin, and Zinoviev, were purged while the other party members were arrested on charges of anti-Soviet activities and either executed or sent to labor camps. In addition, millions of other people disappeared or were also sent to labor camps (Walsh 133). ...read more.

The citizens of the Soviet Union could not criticize Stalin or else they would be immediately 'purged' (Lowe 327). So he still denied basic liberties as the people still had limitations in what they could say. Therefore, Stalin gained more power in the political aspect of the society with the new constitution. Furthermore, Stalin had control over the cultural and artistic life, which influenced the way people think. Stalin forced writers, musicians, and artists to make works of realism glorifying soviet accomplishments, which must satisfy him or else they would be persecuted (Lowe 327). For education, secret police would watch and ensure the teachers were only teaching about Communist ideology. Schoolchildren were expected to join the Young Pioneers (Walsh 135). He took advantage of all forms of art and the education system, and used it as a propaganda. He got rid of independent thinking and had artists glorify him only to make him look good and help elevate himself to a Godlike rank. He created restrictions for art when it should be a freedom of expression, thus he constricted people to focus on one idea. ...read more.

Furthermore, he failed to have total control over the religious aspect and ban any kind of religious worship. When he destroyed the churches and drove out the priests and kulaks, it forced all religion to go underground (Kuchenig). So people were still able to continue practicing their own religion secretly. They denied to stay loyal to Stalin and to believe in Communism. Hence, there were still some authoritarian aspects left in the Soviet Union because Stalin was not always able to impose his will. Consequently, the Soviet Union under Stalin was still an overall totalitarian state because even though the peasants did gain some power over their livestock, Stalin still had control in almost every political, social, and economic aspect of life. People began to obey his rules because they did not want to end getting killed or being sent to labor camps. While he instilled fear in most of the citizens, some saw him as one of the "real heroes of the Revolution" (Walsh 135) because he created social mobility for those who didn't have the opportunity before. Thus, Stalin had total control over the Soviet Union as the citizens were being loyal and did personal sacrifice for the good of the state. ...read more.