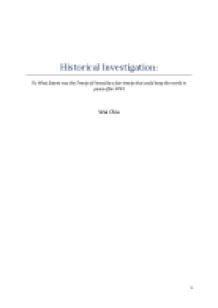 To What Extent was the Treaty of Versailles a fair treaty that could keep the world in peace after WWI?

﻿Historical Investigation: ________________ To What Extent was the Treaty of Versailles a fair treaty that could keep the world in peace after WWI Wai Chiu Contents A. Plan of Investigation B. Summary of Evidence C. Evaluation of sources D. Analysis E. Conclusion F. Bibliography 1. Plan of Investigation The terms in the Treaty of Versailles have always been a very controversial topic to discuss. There have always been two schools of thoughts. On school believes that a harsh punishment could prevent Germany from creating any further tensions with the Allies while the other school supports the fact that the treaty was too unfair for the Germans and that it would only lead to further tensions in the future. They did not believe it would be a suitable solution for maintaining peace. For the Germans, being forced to accept sole responsibility for causing the WWI was a violation of honor and many other terms within the treaty outraged their population.[1] The aim of this investigation is to look deeply into some of the terms of the treaty to see whether they were fair and equitable. The investigation will evaluate the degree to which the Treaty of Versailles was a fair treaty that could bring peace to the world. The sources selected for this investigation will be books, articles and videos related to the topic and they will be analyzed deeply and carefully. ...read more.

Belgium and South Africa.[9] At the time of the signing, many thought that the Treaty did nothing to pacify or permanently weakened the Germans. Because of this, the treaty of Versailles was widely expected to lead to future conflicts.[10] French field marshal Ferdinand Foch claimed ?This is not peace. It is an armistice for twenty years.?[11] Sure enough, just slightly over 20 years after the signing of the Treaty of Versailles WWII started and became the most widespread war in human history. Throughout Germany, the majority found that the treaty was too harsh against Germany and Germany did indeed refuse to sign it at the beginning and claiming the war guilt cause ?a violation of honor?.[12] On the other hand, Germany had no other options and finally signed the treaty under a new government. 1. Evaluation of sources The 20th Century World Causes, Practices and Effects of Wars written by Kelly Rodgers and Jo Thomas provides a detailed comprehensive account of the terms of the Treaty of Versailles which was signed at the end of the WWI. The main purpose of this book is to link the terms of the Treaty to all the events in WWI since the source also covers the events from the cause of the war to the end of the war. This book is also used as a teaching material and is rather unbiased since it covers the both school of thoughts of the historians views on the Treaty. ...read more.

The feeling of the population was disappointed and the League did a really wrong decision of letting one of the most pierce nations out of the League. The Treaty of Versailles made Germany look like the looser of Europe. It left her all alone suffering on herself without any help or plans of cooperating together to bring back Europe?s economy or maintaining peace. The treaty was seem mostly by the historians as a main reason for the rise of Adolf Hitler and the outbreak of the WWII. The treaty outraged the Germans instead of trying to maintain peace within Europe. To some extent it d not help to promote peace but was one of the major factor leading to the greatest war in mankind history ? WWII. 1. Conclusion The Treaty of Versailles was a very controversial treaty signed at the end of WWI. Some believed that it was a treaty harsh enough to contain the Germans while some believed that the harsh terms in the treaty would only create more tensions in the future. From this investigation it seems that the Treaty of Versailles was a main factor leading to the rise of Adolf Hitler and the outbreak of WWII. It totally destroyed the German?s hopes and motivated Hitler to bring together the population to rebuild their country. The Treaty of Versailles failed to end a war but was an unfair treaty that enraged the Germans. It was unquestionably an unfair treaty that failed to do what everyone in Europe wanted. 1. ...read more.