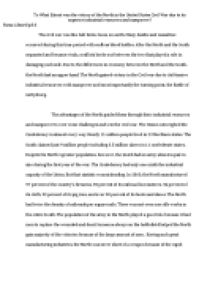 To What Extent was the victory of the North in the United States Civil War due to its superior industrial resources and manpower?

﻿To What Extent was the victory of the North in the United States Civil War due to its superior industrial resources and manpower? Faraz Ahmed pd:3 The civil war was like hell broke loose on earth. Many deaths and casualties occurred during this time period with endless blood battles. After the North and the South separated and became rivals, conflicts broke out between the two that played a role in damaging each side. Due to the differences in economy between the North and the South, the North had an upper hand. The North gained victory in the Civil war due to its Massive industrial resources with manpower and most importantly the turning point, the Battle of Gettysburg. The advantages of the North guided them through their industrial resources and manpower to over come challenges and win the civil war. ...read more.

Having such great manufacturing industries, the North was never short of a weapon because of the rapid production rate. The railroads tremendously helped the North in transporting weapons, men and ammunition. Because of the long distances and the amount it took to travel by foot, railroad would cut it more than half. This allowed the North to be prepared for attacks and always had resources under their hand for use. McPherson argued that south had the upper hand and they were playing offence, but still lost. South fought on their land and was suppose to protect it. Leading back to the cause, North?s industrial innovations and transportation efficiencies, the south lost and wasn?t able to keep up. One of the fierce battles that took place during the Civil War and was claimed the turning point was the Battle of Gettysburg, which ultimately aided the North to victory. ...read more.

After those slaves were free, many came and joined the Union in The Civil War. The North was aided by the joining of the slaves in their army because not only it helped them defeat the confederates, but also opened the eyes of many and showed them that slaves can do a lot more, and should be treated equally. This then added an objective of freeing slaves in the battle on uniting the states. Having slaves on the North?s side advocated their progress in the war and ultimately gave them victory As a result, The North?s victory had many factors to it, but the most important ones were the production of industrial resources and through that, the winning of major battles. The power to transport and produce modern weaponry aided the North in battles. Having a significant amount of men changed the whole battle around and forced South to face many difficulties. Due to the South?s passion for slavery, they lost the Civil War and ended up joining the Union and becoming a nation called the U.S.A. ...read more.