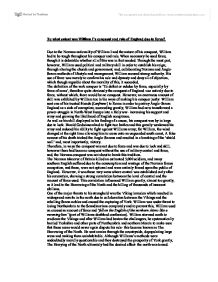 To what extent was William Is conquest and rule of England due to force?

To what extent was William I's conquest and rule of England due to force? Due to the Norman nationality of William I and the nature of his conquest, William had to be tough throughout his conquer and rule. When necessary he used force; though it is debatable whether all of this was in fact needed. Through the most part, however, William used political and military skill in order to establish his reign; through altering the church and government, and, collaborating Norman and Anglo-Saxon methods of lifestyle and management, William secured strong authority. His use of force was merely to confirm his rule and dynasty and deny all of objection, which though arguable about the morality of this, it suceeded. The definition of the verb conquer is 'To defeat or subdue by force, especially by force of arms', therefore quite obviously the conquest of England was entirely due to force, without which, there would be no conquest. However, an enormous amount of skill was exhibited by William too in his ways of making his conquer justly: William sent one of his trusted friends (Lanfranc) to Rome in order to portray Anglo-Saxon England as a sink of corruption; succeeding greatly, William had now transformed a power-struggle in North-West Europe into a Holy war- increasing his support and army and growing the likelihood of English acceptance. ...read more.

In addition to the personal visits of the king in his itinerant kingship where the king toured the country investigating, inspecting and encouraging his officers, William established control by his laws written up in the commonly used today- Chancery. The Chancery was an aspect of government upon which the Normans had very little knowledge of, this lack, which could have weakened Williams position merely strengthened his situation; he enlightened the system with a scriptorium where the documents were written up and organised and even started the 'privy seal', whereby documents could be printed with the 'great seal' while the king was travelling. This well organised system in the Chancery increased Williams control over the English as he was able to clearly create laws, publicize them, and keep them in good condition- minimizing opposition towards the laws and further increasing the awareness of his social and political skill. When it came to enhancing control on a more local basis, William yet again used the English method and kept the 'shire and hundred courts' system in place. The shire court system tried offences against the crown while also supplying authoritative information on local customs and rights. ...read more.

William began using force even before his coronation whereby he pillaged southern land in order for Harold's successor Edgar Atheling to surrender, achieving this, William was crowned king with the full rights. Very soon after his Christmas, 1066 coronation, William felt it necessary to return to Normandy taking with him the natural leaders of the English. Nevertheless, there was trouble and although William returned and put down these first revolts easily, new ones followed. From the beginning of his rule, William had to be tough, he was foreign and therefore not welcomed by the English - the conquest was forced upon Britain like any conquest would be. It was sometimes required for William to be brutal, rebellions would not be ended by negotiation and therefore had to be crushed in order for William to remain in power. But, beyond that we find a modernised and well structured society, with collaborated support from both Norman and Anglo-Saxon methods, and this while improving the economy and society of the country, also allowed loyalty and trust to form between William and the public by taking things slowly and subtly. His policies were innovative and largely for the benefit of the kingdom- he used fortification, the church and reformation in the government too creating boundaries and allowing enforcement of laws. ...read more.