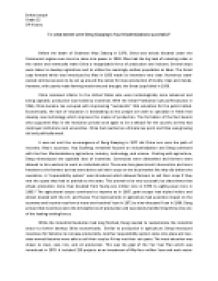 To what extent were Deng Xiaopings Four Modernizations successful?

﻿Stefan Joseph Grade 12 DP History To what extent were Deng Xiaoping?s Four Modernizations successful? Before the death of Chairman Mao Zedong in 1976, China was strictly dictated under the Communist regime ever since he came into power in 1949. Mao had the big task of restoring order in the nation and eventually make China a recognizable force of production and industry. Several steps were taken to develop agriculture and to utilize the seemingly endless population as labor. The Great Leap forward which was introduced by Mao in 1958 made its intentions very clear. Numerous state-owned communes were to be set up around the nation for mass production of mostly crops and metals. However, with poorly made farming machinery and drought, the Great Leap failed in 1959. China remained inferior to the United States who were technologically more advanced and being capitalist, production was fueled by incentives. ...read more.

A ?responsibility system? was introduced which allowed farmers to sell their crops if they met the quota they had to provide to the state. This proved to be very successful as data shows that wheat production more than doubled from fourty-one million tons in 1978 to eighty-seven tons in 1985.1 The agricultural output continued to improve as in 1987, grain output had tripled India?s and almost leveled with the U.S. and Russia. The improvements in agriculture had a positive impact on the economy and income rose from a mere one-hundred Yuan in 1971 to nine-thousand Yuan in 1986. Deng proved that incentives were the driving forces of production and was slowly transforming China into one of the leading trading forces. While the Industrial Revolution had long finished, Deng needed to revolutionize the industrial sector to further develop China economically. Similar to production in agriculture, Deng introduced incentives for factories to increase productivity. ...read more.

Also, the Cultural Revolution not only stopped access to universities but destroyed many of them. Deng quickly restored scientific research institutes and academies and held conferences to further develop new research centers across the country. Almost ten percent of the country?s GDP was being spent on military development. The People?s Liberation Army lacked in weapon technology which is why researchers traveled abroad to the U.S. during the 1980?s to observe top of the line military equipment.4 Even though China?s military were approximately fifteen years behind the leading industrial countries, Deng?s restoration of research institutes promised the long-term development of military weapons. Deng Xiaoping?s four modernizations were successful to some extent and definitely achieved what Mao envisioned in the Great Leap forward but with the use of capitalism to add incentives to production. Even though the sectors of science and the military were still lagging, Deng?s revolutionary change in agriculture and industry set the country on the path of economic prosperity. With a strong economy, modernization in all sectors can be easily achieved with the use of funding. ...read more.