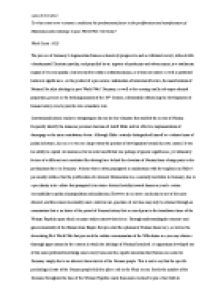 To what extent were economic conditions the predominant factor in the proliferation and manifestation of Nationalsocialist ideology in post World War I Germany?

﻿Lukas Schmelter To what extent were economic conditions the predominant factor in the proliferation and manifestation of Nationalsocialist ideology in post-World War I Germany? Word Count: 6813 The process of Germany?s degeneration from an extensively progressive and acculturated society, infused with a fundamental Christian morality, and propelled by an impetus of modernity and advancement, to a totalitarian regime of visceral quality, characterized by ruthless authoritarianism, is of intricate nature as well as profound historical significance. As the product of a precarious combination of interrelated factors, the manifestation of National Socialist ideology in post-World War I Germany, as well as the ensuing conflict of unprecedented proportion, persists as the defining moment of the 20th Century, substantially influencing the developments of human history even beyond its own calamitous ruin. Conventional historic analyses attempting to discern the key elements that enabled the ascent of Nazism frequently identify the immense personal charisma of Adolf Hitler and his effective implementation of demagogy as the main contributory factor. Although Hitler certainly distinguished himself as a talented man of political rhetoric, his success was to a large extent the product of developments beyond his own control. It was his ability to exploit circumstances for his own benefit that was perhaps of greater significance, yet ultimately factors of a different sort constituted the driving force behind the elevation of Nazism from a fringe party to the predominant force in Germany. A theory that is often propagated in combination with the emphasis on Hitler?s personality outlines that the proliferation of extremist Nationalism was essentially inevitable in Germany, due to a peculiarity in its culture that prompted it to retain a distinct hostility toward democracy and a certain susceptibility to political manipulation and militarism. However an accurate conclusion to one of the most debated, and thus almost inexorably most controversial, questions of our time may only be attained through an examination that is inclusive of the period of German history that occurred prior to the tumultuous times of the Weimar Republic upon which so many studies narrow their focus. ...read more.

As a result they were completely immobilized when they were faced by the success of parties that employed violence and illegality as means to fulfill their political ambitions. The SPD?s inability to act as the solid foundation for democracy illegitimated the Weimar Republic from its outset, and in turn provided a legitimate point of criticism for the radical right, that tacitly utilized the blatantly dysfunctional Republic, and its primary supported the SPD, as an embodiment of the flaws of democracy, underlining their appeal for an authoritarian, nationalistic leadership. The second party of the founding political allegiance of 1919 was the catholically constituted Centre Party. Despite persisting as one of the Republics largest and most consistent parties, mainly due to the adherence of the Catholic community to this political institution, the Centre Party materialized as an unreliable supporter of Weimar. Naturally inclined toward conservatism due to its profound religious roots, the Centre Party succumbed to a perilous undercurrent of radical nationalism emanating from the papal authority in Rome, which drove a deep cleft between itself and the democracy of the Republic. The presence of socialistic and even communistic inclined sentiment in Weimar Germany worried the Pope, who feared that an ascent of the atheist adherent left would spell the demise of Catholicism in Germany. Therefore Rome increased its degree of interference in the political orientation of the Centre Party, directing it onto a radical course of nationalism, believing that only a strong, authoritarian government could mitigate the rise of a leftist revolution. Thus the Centre Party, though as aforementioned one of the largest parties, employed its political weight for an antidemocratic course, tolerating the Republic out of necessity rather than conviction, and thus actively contributing to its dysfunctional nature, its subsequent demise and the consequent rise of Nazism. In fact Richard J. Evans regards the Centre Party as a prime example of the key, underlying problem of Weimar. ...read more.

With the increased electoral support and crucial financial backing of business in Germany, the Nazi party excelled in its march to dominance, and attained its ambition of an authoritarian state with the help of the arbitrary economic circumstances of the time. The study of the Nazi movement has produced myriad conclusions, perspectives and explanations, and perhaps there is no one approach that succeeds in combining all the relevant aspects and associated ramifications into one coherent synthesis. Yet from the considerations outlined above, ranging from historic to political and socioeconomic factors, it appears evident that though several aspects were significant and to an extent paved the way for later developments, it was the economic circumstances of the Weimar Republic that constituted its demise and subsequently enables the rise of Nazism. Without the combined destitution of inflation and depression, the political institutions of the time may have been able to stem the extremist sentiment procured by historic consequences. Yet the Weimar Republic was impotent in this respect, as it was confronted by insurmountable economic realities, and so permitted the eclectic ideology of Nazism to be forged from various in current elements of extremism, into one conformed conception that was able to effectively translate ideas into violent action, eventually toppling the nation of Germany into oblivion. Works Used Burleigh, Michael. The Third Reich: A New History. New York: Hill and Wang, 2001. Print. Evans, Richard J. The Coming of the Third Reich. New York: Penguin, 2004. Print. Fest, Joachim C. Hitler. New York: Harcourt Brace Jovanovich, 1974. Print. Gregor, Neil. Nazism. Oxford: Oxford UP, 2000. Print. Kershaw, Ian. Hitler. New York: W.W. Norton, 1999. Print. Shirer, William L. The Rise and Fall of the Third Reich; a History of Nazi Germany. New York: Simon and Schuster, 1960. Print. Taylor, A. J. P. The Origins of the Second World War. New York: Atheneum, 1962. Print. Winkler, Heinrich August. Weimar, 1918-1933: Die Geschichte Der Ersten Deutschen Demokratie. MuÌnchen: Beck, 1993. Print. ...read more.