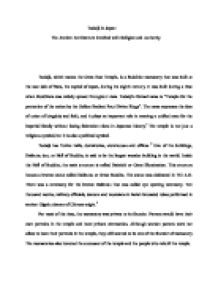 Todaiji, which means the Great East Temple, is a Buddhist monastery that was built at the east side of Nara, the capital of Japan, during the eighth century. It was built during a time when Buddhism was widely spread throughout Asia.

Todaiji in Japan: The Ancient Architecture involved with Religion and Authority. Todaiji, which means the Great East Temple, is a Buddhist monastery that was built at the east side of Nara, the capital of Japan, during the eighth century. It was built during a time when Buddhism was widely spread throughout Asia. Todaiji's formal name is "Temple for the protection of the nation by the Golden Radiant Four Divine Kings". The name expresses the idea of union of kingship and faith, and it plays an important role in creating a unified state for the imperial family without losing federation clans in Japanese history.1 The temple is not just a religious symbol, but it is also a political symbol. Todaiji has Votive halls, dormitories, storehouses and offices 2 One of the buildings, Daibutsu den, or Hall of Buddha, is said to be the largest wooden building in the world. Inside the Hall of Buddha, the main structure is called Dainichi or Great Illumination. This structure houses a bronze statue called Daibutsu or Great Buddha. The statue was dedicated in 752 A.D. ...read more.

Emperor Shomu's family also shared his religious zeal. For example, He and his consort became vegetarian to meet the standard of monks and they also made thousands of copies of Buddhist scriptures. Todaiji is the headquarter of monasteries where monks were to be trained and ordained. In the early age, Buddhism was more about for monks or people who entered the monastic life to gain the spiritual enlighten through meditation or daily works. Laymen gained enlightenment by supporting the monastic life and they achieved nirvana only through good karma and rebirth at higher levels of existence until they too could lead a hermetic life. Helping building Todaiji consider as supporting monastic life, which is one of the reason why government mobilized people to join the construction. However, a Buddhism temple became a place which protected not only individual believers but also the nation and their rulers. Since it protected a kingdom and its ruling families, it attracted state resources to support the faith. This practice played an important role of in expansion of Buddhism in Asia. Todaiji's huge votive hall and religious art reflect the wealth and power of the throne and express the complex theological concepts.6 ...read more.

The temple was badly damaged in 1180 and 1567 during the civil wars and earthquakes. Only Shoso-in treasure house and Sangatsu-do building survived; and only parts of the lotus petals on the statue's pedestal is from the original. Since Todaiji is an important monument which embodies both political and Buddhism faith, it was repaired fast and survived twelve centuries. Although each generation of restorers has their own style of rebuilding the temple, they kept its Strong Chinese features and maintained both the forms and spirit of the past architecture. Its survival shows its own significant to Japan. Japanese people think it is necessary to reconstruct this temple after chaos and disaster. The original Todaiji was thirty percent wider than the contemporary monastery building.9 Todaiji was the second important building during the Nara period after Nara palace. Nevertheless, Todaiji has the same arrangement with the Nara palace. The temple goes from north to south along with an axis and is surrounded by walls with three gateways on the south and north. Three gateways are made for people with different identities. Not everyone can walk through the middle door. There are two pagodas at the south side of Daibutsu den, which is consider as the tallest structure in ancient East Asia.10 ?? ?? ?? ?? ...read more.