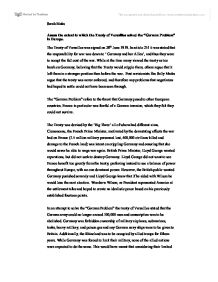 Assess the extent to which the Treaty of Versailles solved the "German Problem" in Europe. The Treaty of Versailles was signed on 28th June 1919. In article 231 it was stated that the responsibility for war was down to ' Germany and her Allies', and thus they were to accept the full cost of the war. While at the time many viewed the treaty as too harsh on Germany, believing that the Treaty would cripple them, others argue that it left them in a stronger position then before the war. Post revisionists like Sally Marks argue that the treaty was never enforced, and therefore any problems that negotiators had hoped to settle could not have been seen through. The "German Problem" refers to the threat that Germany posed to other European countries. France in particular was fearful of a German invasion, which they felt they could not survive. The Treaty was devised by the 'Big Three' all of whom had different aims. Clemenceau, the French Prime Minister, motivated by the devastating effects the war had on France (1.5 million military personnel lost, 400,000 civilians killed and damage to the French land) was intent on crippling Germany and ensuring that she would never be able to wage war again. ...read more.

While the sum was not decided at the Treaty of Versailles, it was later decided by the Reparations Committee in 1921 that Germany was to pay �6,600 million; this high figure was justified by the Allied by Article 231, which obliged Germany to accept full responsibility for the outbreak of the war. Historians use the collapse of the German mark in 1923 as evidence for the reparations being too harsh on Germany, and the "Big Three' attempting to forever cripple Germany. Altogether, Germany lost over one millions square miles of land and 6 million subjects and her colonies were passed onto Britain and France. The Treaty also took away 10% of Germany's industry and 15% of its agricultural land. British economist John Maynard Keynes argued that the coal and iron provisions were 'inexpedient and disastrous', leaving Germany with the ability to produce sixty million tons per annum, whereas in 1913 she has consumer 110 million tons. The use of protective tariffs (by France and Britain) was also said to have destroyed trade and the economic base of Germany, so that they could never recover. The Treaty did however, leave Germany powerful with the means to once again cause trouble. The treaty did not 'weaken Germany as much as the war weakened her European enemies and was 'relatively lenient' according to Niall Ferguson. ...read more.

The treaty was 'relatively lenient' and 'too weak to be a "Catharginian peace"'. The settlement would only provide security against a new German aggression with the cooperation of the German Government. If she refused to work with the allies in the execution of the treaty, then the treaty would not be enforced. Following the End of the war Germany remained the greatest powers in Europe. Once Germany recovered from the economic effects of the war she would pose a major threat to the other European powers and the settlement contained nothing that would effectively guard against this situation. Furthermore, Post-Revisionist historians like Ruth Henig and Elcock argue that 'the failure of the settlement did not lie so much in the deficiencies of their work as in what happened after 1919'. The fact that the Treaty of Versailles was never enforced meant that any problems the 'Big Three' had hoped to solve were left unchecked and Germany was left to do as she pleased. The treaty was one of compromise, and therefore there was little will to enforce it by the US and Britain. France the only country that desired the enforcement of the Treaty was in no position to do so. The US became disillusioned and chose to withdraw itself from European affairs, Britain came to see the peace as too harsh and favoured revision. Sarah Binks ...read more.