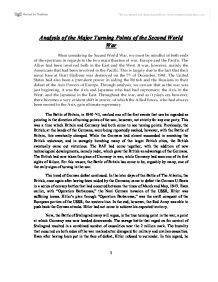 Analysis of the Major Turning Points of the Second World War When considering the Second World War, we must be mindful of both ends of the spectrum in regards to the two main theatres of war, Europe and the Pacific. The Allies had been involved both in the East and the West. It was, however, mainly the Americans that had been involved in the Pacific. This is largely due to the fact that their naval base at Pearl Harbour was destroyed on the 7th of December, 1941. The United States had also been a prevalent power in aiding the British and the Russians in their defeat of the Axis Powers of Europe. Through analysis, we can see that as the war was just beginning, it was the Axis and Japanese who had had supremacy; the Axis in the West, and the Japanese in the East. Throughout the war, and as it plays on, however, there becomes a very evident shift in power, of which the Allied forces, who had always been second to the Axis, gain ultimate supremacy. ...read more.

Hitler's plan through "Operation Barbarossa," was the swift conquest of the European portion of the USSR; the western line. In the end, however, the Red Army was able to push back the German attacks. Hitler had not come to achieve his expected territory. Now, the Battle of Stalingrad many will argue, is the true turning point in the war; a point at which Germany was now headed downwards. The savage battle that raged on for control of Stalingrad resulted in a combined number of causalities near the 2 million mark. The brutality that occurred on both sides of the war marked utter disregard for military and civilian casualties. Even after having been put in the face of defeat, Hitler refused to surrender. In this regard, he became numb and paralyzed in his own ideological world, and as a result lost due largely to his stubbornness. After having pummelled the United States navy at Pearl Harbour and later causing more damage to the Americans at Batten, an area of which more naval and air forces were destroyed; the Japanese had gained supremacy. ...read more.

It is important to note that it was because of the American effort, in severing Japanese supply lines, that the Japanese were left with no choice but to abandon their fleets. At this point, and as of now, the United States had come to gain both supremacy in the air and supremacy at sea. This was the turning point in the Pacific. Like the Europeans in the West, the war in the Pacific had also seen a great turning point in war, and thus a turning point in regards to the change in power. Germany, who had at one time been untouchable, and well on its way to European domination, had come to see that the tables had been turned, and that they would soon be defeated. In many regards the story is the same in the Pacific. What was once the leading power in the East had now lost it all. Both the powers' of Germany and that of Japan had been lost. ?? ?? ?? ?? 1 ...read more.