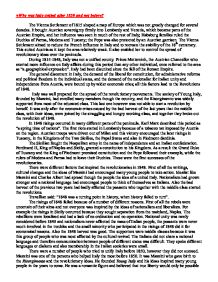 ?Why was Italy united after 1850 and not before? The Vienna Settlement of 1815 shaped a map of Europe which was not greatly changed for several decades. It bought Austrian sovereignty firmly into Lombardy and Venetia, which became parts of the Austrian Empire, and her influence was seen in much of the rest of Italy; Habsburg families ruled the Duchies of Parma, Modena and Tuscany; the Pope was also protected by an Austrian garrison. The Vienna Settlement aimed to reduce the French influence in Italy and to recreate the stability of the 18th centenary. This suited Austria as it kept the area relatively weak. It also enabled her to control the spread of revolutionary ideas over the peninsula. During 1815-1848, Italy was not a unified county. Prince Metternich, the Austrian Chancellor who exerted more influence on Italy affairs during this period than any other individual, once referred to the area as "a geographical expression". Italy had been disunited since the fall of the Roman Empire. The general discontent in Italy, the demand of the liberal for constitution, for administrative reforms and political freedom in the individual states, and the demand of the nationalist for Italian unity and independence from Austria, were bound up by wider economic cries; all this factors lead to the Revolutions of 1848. ...read more.

They spoke different languages or dialects and also membership in the Italian societies were small. There were a number of people who tried to unify Italy before 1850, however they did not succeed. Mazzini was one of the persons who helped Italy the most before 1850. It was Mazzini who gave birth to the Risorgimento and the revolutionary ideas. He founded Young Italy and his ideas inspired many young people in the years to come. He was a romantic figure and believed that true liberty would only be possible when Italy was united as a single nation. He believed in a republican kind of government. He also believed that Italy did not need foreign help, as Mazzini said: "Italy will make herself". It can however be argued that Mazzini wasn't quite right on this point. Italy did need foreign help to sustain the revolutionaries to expel Austria. Mazzini did organized risings in Ganova and Savoy but they were crushed by the King of Piedmont. However it cannot be said that Mazzini achieved nothing by 1850 because he gave birth to the ideas of liberalism, nationalism and created the Roman Republic, even so it did not last for very long. ...read more.

Garibaldi wanted a united Italy, he put Italy's independence before personal ambitions and this is what makes him a national hero. He was a romantic nationalist and a republican. Napoleon III was a romantic nationalist too. However it can be discussed that his interest in the independence of Italy may have been the completing of the Bonaparte Legend: making Europe a liberal, national country. Cavour was described as Italy's brain, Mazzini was Italy's soul and Garibaldi was Italy's sward. During the revolution it was proved that the Risorgimento had now progressed a long way. However Italy could not gain her independence by herself, foreign help was needed and eventually this help arrived from Napoleon III of France. As a conclusion there were different attempts, like the revolution of 1848, and different people, like Mazzini, Charles Albert and Pope Pius IX, who tried to unify Italy before 1850, but maybe because foreign help was not offered and maybe because important figures like Garibaldi, Cavour and Napoleon III had still not come in the scene Italy was not unified before 1850. It may also be argued that national unity and the idea of a unified Italy were barely considered before 1840. Italy was a divided county and the majority of people, the working class, were not interested in the political life. ...read more.