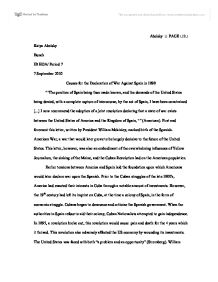 US History. Causes for the Declaration of War Against Spain in 1898

Katya Abelsky Bunch IB HOA/ Period 7 7 September 2010 Causes for the Declaration of War Against Spain in 1898 " 'The position of Spain being thus made known, and the demands of the United States being denied, with a complete rupture of intercourse, by the act of Spain, I have been constrained [...] I now recommend the adoption of a joint resolution declaring that a state of war exists between the United States of America and the Kingdom of Spain, ' " (American). First and foremost this letter, written by President William Mckinley, marked birth of the Spanish- American War; a war that would later prove to be largely decisive to the future of the United States. This letter, however, was also an embodiment of the overwhelming influences of Yellow Journalism, the sinking of the Maine, and the Cuban Revolution had on the American population. ...read more.

William McKinley realized that by assisting the Cuban citizens, the United States could restore its attempts at trade expansion and that by defeating Spain the United States could achieve greater power through out the Pacific Ocean. These incentives paved the way for American involvement in the Spanish- Cuban struggle of the 19th century. Yellow Journalism- a term used to define the act of sensationalizing stories for entertainment purposes- is one of the most recognizable causes of the Spanish- American War. At the hand of American Journalists, the Spanish, such as General Weyler, were illustrated as evil and immoral. From about 1895 to 1898, stories -most of which were falsified- arose which continued to paint the actions of the Spanish in Cuba as cruel and unethical. At the head of the Yellow Press were William R. ...read more.

Despite the lack of evidence, the Yellow Press immediately directed their readers to blame the Spanish with headlines such as Hearst's "The Warship Maine Was Split In Two By An Enemy's Secret Infernal Machine!'' . The conflict in Cuba had captured America's full attention, and "Remember the Maine, To hell with Spain" echoed throughout the United States. The Cuban Revolution of 1895, the influence of the Yellow Press, and the sinking of the USS Maine were noteworthy events in history; each of these circumstances were incentives for American involvement in the Cuban struggle for independence. In 1898, American involvement escalated as President McKinley declared war against Spain. The United States, driven by Yellow Journalism, would face turmoil, casualties, but eventually an overwhelming success. All things considered, involvement in the Spanish- American War would succeed in sculpting the United States into the respected power it is today. ...read more.