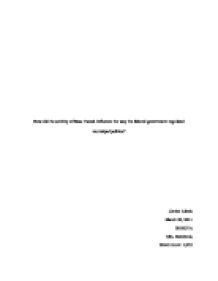 US History. How did the activity of Boss Tweed influence the way the federal government regulated municipal politics?

This cartoon was published with the intent of satirically portraying the extent to which Tammany Hall's influence over New York City had increased through interconnected businessmen and politicians. This illustration is valuable because it provides insight into an initial reaction to the public exposure of Tweeds corruption in 1871. Also, since this cartoon was published in common newspaper, it may have influenced the opinions of many who lacked knowledge of what was truly occurring in municipal politics. It is limited, however, because it was published shortly after Tweed's arrest rather than after his trials in 1873. This illustration was created before a verdict was accepted by the judicial system, and therefore, was based upon information that may or may not have been accurate. Boss Tweed is Kenneth Ackerman's historical account about the political activity of Tweed. This book was written with the purpose of recording Tweed's actions and presenting them as the basis of modern New York City and was published in 2005. This source is valuable because documents from municipal and federal archives such as New York Election Frauds, Report 31 by the House of Representatives, the New York County Board of Supervisor's files, and several others were assessed in order to portray an accurate description of the events. ...read more.