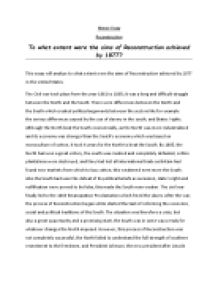 US History. To what extent were the aims of Reconstruction achieved by 1877?

﻿History Essay Reconstruction ________________ To what extent were the aims of Reconstruction achieved by 1877? ________________ This essay will analyze to what extent were the aims of Reconstruction achieved by 1877 in the United States. The Civil war took place from the year 1861 to 1865; it was a long and difficult struggle between the North and the South. There were differences between the North and the South which created political arguments between the sectors like for example the serious differences caused by the use of slavery in the south, and States ?rights. Although the North beat the South economically, as the North was more industrialized and its economy was stronger than the South?s economy which was based on monoculture of cotton, it took 4 years for the North to beat the South. By 1865, the North had won a great victory, the south was crushed and completely defeated, cotton plantations were destroyed, and they had lost all international trade as Britain had found new markets from which to buy cotton, this weakened even more the South. Also the South had seen the defeat of its political beliefs as secession, state?s right and nullification were proved to be false, this made the South even weaker. The civil war finally led to the 1863 Emancipation Proclamation which freed the slaves. ...read more.

Additionally, one of the most important achievements of reconstruction were the amendments to the United States constitution, the first one was the 14th amendment, this amendment to the constitution established ?the right of all citizens of the United States to equal protection of the laws and defined a US citizen in such a way as to include all Afro-Americans?, In this way, Reconstruction achieved its aims as it included the Afro-Americans as United states citizens meaning that they now had rights and this made them stronger, meaning that they could now be free and strong. Second, another thing that helped reconstruction achieve its aims was the ?extension of the life and powers of the Freedman?s bureau?, this was an institution which tried to do everything they could to ?ease the transition from slavery to freedom for the Southern Whites?, meaning that this institution was very important as it made it easier for this transition to happen, therefore the extension of its powers resulted in a success for Reconstruction, as it was a major help to achieve one of its main aims. Third, the civil rights law, which specified in a more explicit way what, was implicit in the 14th amendment, ?citizen rights were to be enjoyed by all persons born in the United States, not subject to any foreign power, of every race and color, without reference to any previous condition of slavery or involuntary servitude?, this ...read more.