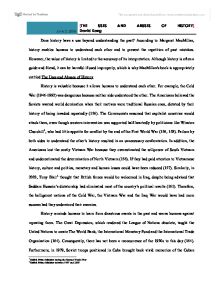 Does history have a use beyond understanding the past? According to Margaret MacMillan, history enables humans to understand each other and to prevent the repetition of past mistakes. However, the value of history is limited to the accuracy of its interpretation. Although history is often a guide and friend, it can be harmful if used improperly, which is why MacMillan's book is appropriately entitled The Uses and Abuses of History. History is valuable because it allows humans to understand each other. For example, the Cold War (1946-1992) was dangerous because neither side understood the other. The Americans believed the Soviets wanted world domination when their motives were traditional Russian ones, dictated by their history of being invaded repeatedly (156). The Communists assumed that capitalist countries would attack them, even though western intervention was supported half-heartedly by politicians like Winston Churchill1, who had little appetite for conflict by the end of the First World War (156, 158). ...read more.

History reminds humans to learn from disastrous events in the past and warns humans against repeating them. The Great Depression, which rendered the League of Nations obsolete, taught the United Nations to create The World Bank, the International Monetary Fund and the International Trade Organization (164). Consequently, there has not been a reoccurrence of the 1930s to this day (164). Furthermore, in 1979, Soviet troops positioned in Cuba brought back vivid memories of the Cuban missile crisis of 1962 (165). It was later discovered that the troops from 1962 were never relocated because Kennedy3 had not insisted on their removal (166). Soviet and American relations deteriorated further because the Russians had not learned from the events of 1962. In addition, the Americans failed to apply the counter-insurgency techniques acquired from the Vietnam War to the first two years of the War in Iraq (170). ...read more.

When Anthony Eden6 applied the lesson to the Suez Canal Crisis, an international calamity transpired (177). Nasser7 was not an aggressor like Hitler. He was a nationalist, who wanted to regain control of the Suez Canal so he could acquire the resources to develop Egypt (178). By interpreting Munich as a comparable event as the Suez Canal Crisis, Eden misused history. These two examples illustrate how the unsuccessful interpretation of history can result in tragedies such as an unprepared defence or an international crisis. History is a guide and a friend because it teaches humility and scepticism, but humans can also abuse history by using it to justify what is already believed to be true. In addition, humans must beware of grand claims in history's name as well as historical explanations that oversimplify the problem. In conclusion, history should be used, and enjoyed, but must be handled with care. ...read more.