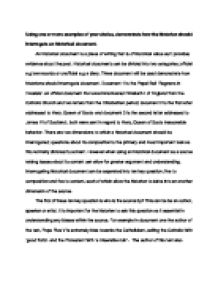 Using one or more examples of your choice, demonstrate how the historian should interrogate an historical document.

Using one or more examples of your choice, demonstrate how the historian should interrogate an historical document.

An historical document is a piece of writing that is of historical value as it provides evidence about the past. Historical documents can be divided into two categories; official e.g law records or unofficial e.g a diary. Three document will be used demonstrate how historians should interrogate document. Document 1 is the Papal Bull ‘Regnans in Excelsis’_ an official document that excommunicated Elizabeth I of England from the Catholic Church and two letters from the Elizabethan period; document 2 is the first letter addressed to Mary. Queen of Scots_ and document 3 is the second letter addressed to James VI of Scotland_, both were sent in regard to Mary, Queen of Scots treasonable behavior. There are two dimensions to which a historical document should be interrogated; questions about its composition is the primary and most important task as this normally dictates its content. However when using an historical document as a source raising issues about its content can allow for greater argument and understanding.

Interrogating historical document can be separated into ten key question; five to composition and five to content, each of which allow the historian to delve into an another dimension of the source.

The first of these ten key question is who is the source by? This can be be an author, speaker or artist. It is important for the historian to ask this question as it essential in understanding any biases within the source. For example in document one the author of the text, Pope Pius V is extremely bias towards the Catholicism, calling the Catholic faith ‘good fruits’_ and the Protestant faith ‘a miserable ruin’_.  The author of this text also indicates something of the sources content, due to the author being wholly pro-Catholic in document 1 the source is descriptive about Catholics ceremonies, ‘prayers, fasts... celibacy’_ and omits to tell the historian about any of the Protestant ones or any parts of Protestantism that Catholic Christians may like or even prefer.

The second question which has to be asked when interrogating an historical document is who is the document for? This is very interlinked with the first question as the relationship between the two persons not only dictates the content but also the tone of the source. For example in document three the mode of address used by Elizabeth I describe James VI, ‘My dear  brother’_ and then herself ‘Your most assured loving sister and cousin’_ shows that there relationship is on good terms thus we can assume that the author being Elizabeth I is being honest. Document one demonstrates how a larger audience can affect the source, for example as the Papal Bull can be read or heard by anyone Pope Pius, the author, ensures that he does not alarm any swaying Catholics by stating that Roman Catholic Church is threatened by Protestants instead he writes briefly that they have ‘grown in power’_ and have attempted to corrupt everywhere in the world. Thus ensuring that the Catholic Church still appears to be the dominant force. This is a comparison between document one and three as Elizabeth

The third question that has to be asked when interrogating an historical document is for what purpose was the source written?

The forth question about composition that must be asked by historians when interrogating historical documents is from what source did the author, artist or speaker get there information that enabled them to write the source?  It is important to ask this question as just like sources which are being used in this essay they may not be reliable. For example the context in which document one was written was written it is known that there was no regular direct contact between Pope Pius V and Elizabeth I therefore Pope Pius V was relying completely on the word of others and would not have known if he would being lied to however unlikely it may have been. This an example of how the historian would have to do further research around the area as a historian’s own knowledge or further research would show them that Pope Pius’s sources were fairly honest and that he was fulling justified in excommunicating Elizabeth. The problem of the source’s sources is also an issue with document two as it is widely known that Elizabeth I was against executing Mary, Queen of Scots, as shown in the introduction to document three when it states that Elizabeth had signed a warrant for Mary’s execution and ‘tore it up’ once before. Plus as also known that Elizabeth’s council were eager to have Mary executed in order to protect that sovereign and therefore they may have been attempting to turn Elizabeth more against Mary by stating she was being uncooperative, ‘I have been well informed of your arrogance’_. Thus how well informed Elizabeth was has to be brought into question when interrogating this document as it would certainly effect it’s reliability.

The fifth and final question that has to asked about an historical documents composition is at what date was the source composed? This is an issue in document two as most letter between members of the aristocracy in the Elizabethan period were written in French and document two even states that it has been translated form French into English. Therefore when interrogating a document which has been translated it is important for the historian to consider what may have been lost in translation or translated wrongly.

The sixth question that has to be asked when interrogating an historical document is what form of information is the source?

The seventh question that has to be asked is about the documents content is what type of information is the source?

The eight question that has to be asked by a historian is what biases occur in the source?

The ninth question that has to be asked is what scope does the document tell us about the period or issues it is about or discussing? It is important to ask this question as it  may indicate the knowledge of the author, artist or speaker about the event or topic being discussed and/or their attitudes and values which inevitably affect the source’s content with biases.

The tenth and last key question that has to be asked when interrogation an historical document is what omissions does the source have?