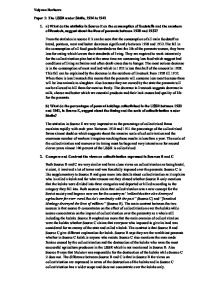 Velyana Borisova Paper 1: The USSR under Stalin, 1924 to 1941 1. a) What do the statistics in Source E on the consumption of foodstuffs and the numbers of livestock, suggest about the lives of peasants between 1928 and 1932? From the statistics in source E it can be seen that the consumption of all main foodstuff as bread, potatoes, meat and butter decreases significantly between 1928 and 1932. The fall in the consumption of all food goods foreshadows that the life of the peasants worsen, they have less for eating which lowers their standards of living. They are required to work intensively for the collectivisation plan but at the same time are consuming less food which suggest bad conditions of living as famine and often death cases due to hunger. The most serious decrease is in the consumption of meat and lard which in 1932 is less than half of the amount in 1928. This fall can be explained by the decrease in the numbers of livestock from 1928 till 1932. When there is less livestock this means that the peasants will consume less meat because there will be less animals to slaughter. Also because they are owned by the state the peasants will not be allowed to kill them for meat so freely. ...read more.

The extract is a reflection of an ordinary young peasant who is a believer in collectivisation and obviously favours Stalin's policy. The value of the source is that it gives an example of a supporter of Stalinism and proves that actually there were people who truly favoured Stalin's rule and it was not because of fear. This source can also expose the success of the Soviet propaganda to portray Bolsheviks values and earn the people's favour towards collectivisation. Also the fact that the peasant is young it reveals that it was easier to propagate the state's ideas to the youngest who have not experienced the time prior the Russian Revolution and have grown with the slogans of the Bolshevik party. The source does not have many limitations as it is a diary which contains reflections and evaluations of a single person and is not aimed to be spread to auditory. Therefore, the content of the extract is reliable and portraits the truth for that time. For example, the peasant says that ''other think differently- and they are the majority'' as they are against collectivisation. It can be concluded that supporters of the collectivisation existed but they were few and can be represented by the diary of this peasant while most of the peasantry was against collectivisation. ...read more.

and obtain capital to develop the industry famine was caused as mentioned in source C. There was high level of misery in the countryside and the consumption of the footstock decreased rapidly between 1928 and 1932 as it can be also seen by Source E. In many areas the peasants stopped their production as a sign of a protest against collectivisation which further deepened the famine. Also many peasants moved to the cities which was also part of Stalin's collectivisation plan and started to work in factories. However, the press all over the country hid the news that there was famine and they were encouraging the peasants to produce as much as possible. The famine between 1932 and 1933 was a manmade famine as it was created by Stalin deliberately in order to crush the peasantry and then unite them in the project of collectivisation. The collectivisation process was really like a ''war on the countryside'' as everyone was trying to survive and escape from the strict regulations and brutality of Stalin. The peasants were attacked by the Party which took their land and could not defend themselves as they were immediately killed or deported in case of resistance. In this situation there was a war between the Party and the nation as collectivisation was imposed over them with all means. ...read more.