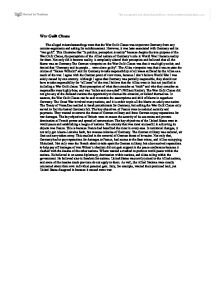 The alleged misunderstandings were that the War Guilt Clause was to prevent Germany from any counter-arguments and asking for reimbursement. However, it was later associated with Germany and its “war guilt”. This illustrates that “In politics, perception is reality” because despite the true purpose of the War Guilt Clause, the perceptions of the Allied nations of Germany’s role in World War I became reality for them. Not only did it become reality, it completely altered their perception and believed that all the blame was on Germany.The German viewpoint on the War Guilt Clause was that it was highly unfair, and denied that “Germany and its people… were alone guilty”. The Allies viewpoint was that it was to state the crimes of “Kaiser Wilhelm” and for Germany to take responsibility of all losses suffered by the Allies as a result of the war. I agree with the German point of view more, because I don’t believe World War I was solely caused by one country. Although I agree that Germany was partially responsible, they should not have to take responsibility for “all loses” of the war.I believe that the Allies were in fact not justified in including a War Guilt clause. Their perception of what they consider as “truth” and who they consider as responsible were highly bias, and was “unfair and one-sided” (William Keylor). The War Guilt Clause did not give any of the defeated nations the opportunity to discuss the situation, or defend themselves. In essence, the War Guilt Clause can be said to contain the assumptions and shift of blame in regards to Germany. The Great War involved many nations, and it is unfair to pin all the blame on solely one nation. The Treaty of Versailles resulted in harsh punishments for Germany, but adding the War Guilt Clause only served to fuel the hatred Germany felt. The key objectives of France were to national security and payments. They wanted to remove the threat of German military and force German to pay reparations for war damages. The key objectives of Britain were to ensure the security of its sea routes and prevent domination of French power and spread of communism. The key objectives of the United States were to world peace and establishing a league of nations. The country that was most successful in achieving its objects was France. This is because France had benefited the most in every area. In territorial changes, it not only got Alsace-Lorraine back, but oversea colonies of Germany. The German military was reduced, air fleet and navy taken away. This resulted in the removal of German threat of invasion. Not only that, Germany had to pay reparations for damages to France, had access to the Saar mines, and Allies occupying Rhineland. Not only were the French about to take apart the German military, but also received reparations to help pay off damages of war.Wilson’s idealism did not gain support in the peace conference because it clashed with the desires of the other nations. Wilson wanted a method to produce world peace within the nations. He believed in no secret diplomacy, domination within nations, and elites ruling within the government. He believed also in freedom for nations. United States was newly joined to the Allied nations, and some of the treaties made previous do not apply to them. As well, the Allied Nations were mostly concerned about their own individual personal gain. Italy, for example, wanted their promised land, yet United States disagreed in because it caused more war.