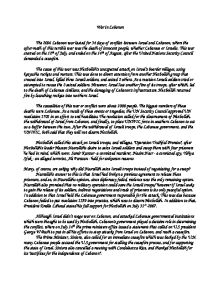 War in Lebanon The 2006 Lebanon war lasted for 34 days of conflict between Israel and Lebanon, where the after-math of this terrible war was the death of innocent people, whether Lebanese or Israelis. This war started on the 12th of July, and ended on the 14th of August, after the United Nations Security Council demanded a ceasefire. The cause of this war was Hezbollah's unexpected attack on Israel's boarder villages, using katyusha rockets and mortars. This was done to divert attention from another Hezbollah group that crossed into Israel, killed three Israeli soldiers, and seized 2 others. As a reaction Israeli soldiers tried or attempted to rescue the 2 seized soldiers. ...read more.

After the withdrawal of Israeli troops, the Lebanese government, and the UNIFIL, both said that they will not disarm Hezbollah. Hezbollah called this attack on Israeli troops, and villages, "Operation Truthful Promise", after Hezbollah's leader Hassan Nasrallahs desire to seize Israeli soldiers and swap them with four prisoners he had in mind, which were: Samir Kuntar- a convicted murderer, Nasim Nasr - a convicted spy, Yahya Sfak - an alleged terrorist, Ali Faratan - held for unknown reasons Many, of course, are asking why did Nasrallah seize Israeli troops instead of negotiating for a swap? Nasrallahs answer to this is that Israel had broken a previous agreement to release these prisoners, and so, in Nasrallahs opinion, since diplomacy failed, violence was the only remaining option. ...read more.

In addition to that, President Emilie Lahoud stated his full support for Hezbollah on July 31st-2007. Although Israel didn't wage war on Lebanon, and attacked Lebanese governmental institutions which were thought to be used by Hezbollah, Lebanon's government played a decisive role in determining the conflict, where on July 14th the prime ministers office issued a statement that called on U.S president George W Bush to put in all his efforts to stop attacks from Israel on Lebanon, and reach a ceasefire. The Prime Minister, Siniora, also called for an immediate ceasefire which was backed by the U.N. many Lebanese people accused the U.S government for stalling the ceasefire process, and for supporting the state of Israel. Siniora also cancelled a meeting with Condoleezza Rice, and thanked Hezbollah for its "sacrifices for the independence of Lebanon". ...read more.