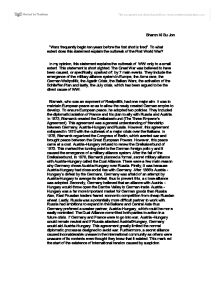 Wars frequently begin ten years before the first shot is fired. To what extent does this statement explain the outbreak of the First World War?

Sharon Ki Su Jon "Wars frequently begin ten years before the first shot is fired". To what extent does this statement explain the outbreak of the First World War? In my opinion, this statement explains the outbreak of WWI only to a small extent. This statement is short sighted. The Great War was believed to have been caused, or specifically, sparked off, by 7 main events. They include the emergence of the military alliance system in Europe, the Arms race, the German Weltpolitik, the Agadir Crisis, the Balkan Wars, the activation of the Schlieffen Plan and lastly, the July crisis, which has been argued to be the direct cause of WWI. Bismark, who was an exponent of Realpolitik, had one major aim. It was to maintain European peace so as to allow the newly created German empire to develop. To ensure European peace, he adopted two policies. They included the diplomatic isolation of France and his plan to ally with Russia and Austria. In 1873, Bismarck created the Dreikaiserbund (The Three Emperor's Agreement). This agreement was a general understanding of friendship between Germany, Austria-Hungary and Russia. However, this agreement collapsed in 1875 with the outbreak of a major crisis over the Balkans. In 1878, Bismarck organized the Congress of Berlin, which averted war and brought peace between the Great European Powers. However, this peace came at a cost. Austria-Hungary refused to renew the Dreikaiserbund of 1873. This marked the turning point in the German foreign policy and it caused the emergence of a military alliance system. After the fall of the Dreikaiserbund, in 1878, Bismarck planned a formal, secret military alliance with Austria-Hungary called the Dual Alliance. There were a few main reason why Germany chose Austria-Hungary over Russia. Firstly, it was because Austria-Hungary had close social ties with Germany. After 1866's Austria-Hungary's defeat by the Germans, Germany was afraid of an attempt by Austria-Hungary to avenge its defeat, thus to prevent this, a close alliance was adopted. ...read more.

This fueled the Germans to follow suit by upgrading its production line to a new standard. Germany's quest for overseas colonies caused Britain, France and Russia to bury their colonial differences, which resulted in the Entente Cordiale between Britain and France. This meant that Germany would now have to face a stronger and larger opposition, which upset Germany. As a result of this, Germany was dangerously isolated instead of emerging as a formidable world power. The isolation of Germany was manifested in the Moroccan crisis when it failed to gain support from other countries to recognize the Sultan of Morocco as an independent monarch and free of French influence. All in all, this policy was seen as a precipitating factor towards the WWI. It was a short-term cause as it only further challenged the two alliances thus causing increased hostility and friction between the two power blocs. The aggressiveness exhibited by this German foreign policy had indeed rattled many powerful nations thus tensions continued to exist and escalate. The Agadir crisis referred to the time when the Germans sent their gunship, "Panther", to the port of Agadir in 1911. This was seen as the first sign of German's expansionist element, Weltpolitik, and the first sign of force using naval means, which shocked Britain. As a result and in response to this, there was a 197% increase in ships during 1900-1912 in Britain. Due to the Agadir crisis, French reaction to the compromise settlement destroyed the administration of Joseph Caillaux, whose main aim had been achieve some measure of reconciliation with Germany. Joseph Caillaux, who was pro-peace was replaced by Raymond Poincare, who was a more aggressive and patriotic leader. Germany and Britain had intended to reduce their naval arms however due to the Agadir crisis, tensions were worsened so they started to increase the arms again. The gunboat, "Panther" was seen as a threat to the British empire's navy. ...read more.

The July crisis was a short-term cause, which sparked off the war, but it was also a result of building tension in the previous decades and all of this accumulated up till the eruption of the Great War of 1914. The proximity and similarity of the experiences in the Balkan Wars and World War I emphasizes the connection between these conflicts. As a result of the Balkan Wars, the Balkan area evolved into a labyrinth of ethnic tensions, nationalist groups and Great power rivalry. Thus, we can say that the Balkan wars were the "first phase" of WWI and it created a perfect setting for WWI to take place. The Balkan wars had enabled Serbia to emerge with both its prestige and power enormously increased. Serbia then became the most powerful Balkan state and thus felt confident enough to threaten Austria-Hungary. Furthermore, Serbia's victory over Bulgaria left Serbia as Russia's remaining ally in the Balkans. The lost of Bulgaria made Russia dependent upon Serbia in order to retain its influence in the Balkans. The consequence of Russia's dependence became manifest at the end of July in the July crisis. The Balkan wars had caused tensions to arise between Austria-Hungary and Serbia specifically and this strained relationship further worsened during the July crisis which directly involved the two rivaling countries-Austria-Hungary and Serbia. In addition, Austria-Hungary was backed up by Germany while Serbia had the backing of Russia which in turned was supported and an ally of France. Hence, this alliance system, which existed in Europe since the 19th century involved all the Great Powers of Europe in World War I. In conclusion, the statement-"Wars frequently begin 10 years before the first shot is fired" can only be agreed to a minimal extent as it only applies for the formation of the alliance system. On the other hand, the most important and main causes; the Balkan wars and the July crisis, were short-term causes which occurred 2 years before the start of the Great War. Thus, I agree to the statement only to a small extent. ...read more.