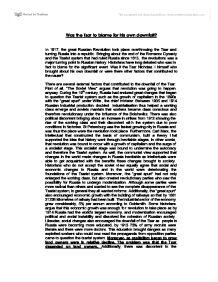 Was the Tsar to blame for his own downfall?

Was the Tsar to blame for his own downfall? In 1917, the great Russian Revolution took place overthrowing the Tsar and turning Russia into a republic. Bringing about the end of the Romanov Dynasty and the Tsarist system that had ruled Russia since 1613, the revolutions was a major turning point in Russian history. Historians have long debated who was in fact to blame for the significant event. Was it the Tsar Nicholas II himself who brought about his own downfall or were there other factors that contributed to the cause? There are several external factors that contributed to the downfall of the Tsar. First of all, "The Soviet View" argues that revolution was going to happen anyway. During the 19th century, Russia had endured great changes that began to question the Tsarist system such as the growth of capitalism in the 1890s with the "great spurt" under Witte, the chief minister. Between 1905 and 1914 Russian industrial production doubled. Industrialisation thus helped a working class emerge and soviets mantain that workers became class conscious and therefore revolutionary under the influence of the Bolsheviks. There was also political discontent bringing about an increase in strikes from 1912 showing the rise of the working class and their discontent with the system due to poor conditions in factories. ...read more.

Moreover, war made the transport system collapse as the improved railway system did not prove to be adequate for the demands of the war. People in St Petersburg became even more discontent and angry with the Tsar over this as they were far away from the food-producing regions. What made matters worse was that its population had increased due to the destitute refugees that were moving to the cities increasing demand for resources at a time were resources were scarce. The food intake of Petograd workers feel by a quarter and infant mortality rates doubled. Furthermore, Russia's heavy defeats against the world's best army during war such as the Battle of Massurian Lakes and Tannenberg badly affected the Tsarist government's reputation. War clearly undermined the Tsarist system. In fact, the Liberal View argues that if there had not been a war Revolution would never have come. Pavlovsky stated "Then, as a thunderbolt came the terrible catastrophe of 1914, and progress changed into destruction". The factors mentioned above convey that it was not the Tsar himself but rather the Tsarist system and the events that took place at that time that were to blame. The truth was that Russia due to its immense territory and ethnic diversity was difficult to reform and also difficult to rule. ...read more.

He also ignored the warnings from Michael Rodzianko who clearly told him that "Discontent is general and on the increase" and that the "formation of a new government was required". He, thus, did not accept the Duma's proposal to share government in time and when he finally did, Rodzianko told him it was simply too late for this concession. The actions of the Tsar and his government made even his closest and most loyal supporters turn against him. Even, the Tsar's cousin Prince Yusupov went against him and killed Rasputin in 1916. In 1917, at the eve of his downfall the Tsar was unaware of the seriousness of the situation and Alexandra disregarded warnings. In conclusion, although several external factors that aimed for the abolition of the Tsarist system were greatly to blame for the Tsar's downfall it was the Tsar's actions and incompetent nature that was mainly responsible for the revolution. His actions made his regime weak as he lost support from all his followers and from the army, his guarantor of stability. Although, war made things worse, it was only a catalyst to a revolution that was bound to happen due to the general discontent in the country. Without any support, the Tsar was made to abdicate his throne on 15th March 1917, bringing to an end his regime and the Tsarist system. ?? ?? ?? ?? ...read more.