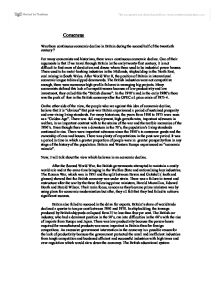 Consensus Was there continuous economic decline in Britain during the second half of the twentieth century ? For many economists and historians, there was a continuous economic decline. One of their arguments is that if we travel through Britain in the early twenty-first century, it is not difficult to find areas of dereliction and disuse where there used to be industrial power houses. There used to be metal-bashing industries in the Midlands, shipbuilding in the North East, coal mining in South Wales. After World War II, the position of Britain in international economic league tables slipped downwards. The British industries were not competitive enough, there were numerous high-profile failures in managing big projects. Many economists defined this lack of competitiveness because of low productivity and low investment, they called this the "British disease". In the 1970's and in the early 1980's there was the peak of fear in the British economy after the OPEC oil price crisis of 1973-4. On the other side of the view, the people who are against this idea of economic decline, believe that it is "obvious" that post-war Britain experienced a period of sustained prosperity and ever-rising living standards. For many historians, the years from 1950 to 1973 were seen as a "Golden Age". There was full employment, high growth rates, important advances in welfare, in an important contrast with to the strains of the war and the terrible memories of the 1930's. ...read more.

Wilson also attempted large-scale reform of trade union power through his White Paper "In Place of Strife" but then backed up because of the trade unions which would create unsolved problems. Even though there was prosperity in the 1960's, it can be argued that many problems in the British economy were not tackled. With the sudden rise of oil prices in 1973, this ended the long post-war boom. There was also deeper structural weakness in Britain which would cause a major depression and much gloom about the prospects for the economy. With the damaging miners strike of 1973-74, it persuaded Heath's government to create a three-day week and then to call a national election in 1974. When Labour returned to power, both of Wilson's and Callaghan's government's found numerous difficulties in overcoming industrial unrest, or in avoiding splits within the Labour Party about how to deal with it. There was also in Britain rising unemployment and financial instability. During the time of the rising unemployment, there was also a period of rapid inflation. The pound lost almost a quarter of its value against the American dollar in 1976. Denis Healey, the Chancellor was forced to take out a massive loan from the International Monetary Fund. This was a humiliating way of showing weakness. The only way the government could obtain this loan was by cutting government spending, which made splits in the Labour party. ...read more.

Many historians say that in 1997, Labour inherited a healthy economic situation, after the Conservatives were in power for 18 years. In conclusion, it is very difficult to determine which of these parties is the right one. One thing that we are sure of is that the British economy of 1997 has a much more extended progress in terms of living standards than the British economy of right after the war. The British population had much more money than after the war. Rationing was a far away memory. During the Cold War era, there was much more stability and a greater peace. The Thatcherian view says that Britain followed the wrong economic path from 1951-79. "Butskellism" was a mistake, too much nationalisation and not enough privatisation and not enough competition. The Thatcherian's are against the "nanny state". The view of the "Golden Age" says that the post-war boom was a period of sustained social and economic success. They say that Britain became more prosperous and an equal society. They are completely against the Thatcherian view. The "balanced" view believes in post-war recovery but they also say that Britain was not competitive enough. They believe in Thatcher's economic reforms but at too high a price in social divisions. They say that the period from Churchill's second term to 1997 has been uneven but probably a successful part of the post-war prosperity of Western Europe as a whole. ...read more.