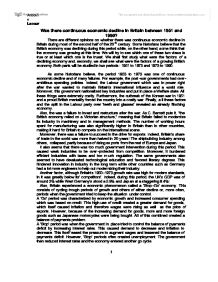 Was there continuous economic decline in Britain from 1951 to 1990

Was there continuous economic decline in Britain between 1951 and 1990? There are different opinions on whether there was continuous economic decline in Britain during most of the second half of the 20th century. Some historians believe that the British economy was declining during this period while, on the other hand, some think that the economy was growing at this time. We will try to see which one of these two views is true or at least which one is the truest. We shall first study what were the factors of a declining economy and, secondly, we shall see what were the factors of a growing British economy. Both parts will be studied in two periods : 1951 to 1973 and 1973 to 1990. As some historians believe, the period 1953 to 1973 was one of continuous economic decline and of many failures. For example, the post-war governments had over-ambitious spending policies. Indeed, the Labour government which was in power right after the war wanted to maintain Britain's international influence and a world role. Moreover, this government nationalized key industries and put in place a Welfare state. All these things were extremely costly. Furthermore, the outbreak of the Korean war in 1951 and a proud British mentality forced the country into a costly war. Finally, all these factors and the split in the Labour party over 'teeth and glasses' revealed an already flinching economy. Also, the was a failure to invest and restructure after the war. ...read more.

The long post-war boom ended in 1973 with a major oil crisis during which the price of oil quadrupled. This caused pressures which, coupled with underlying weakness which had not been solved, created a depression and much concern for the weak economy. There was a miners' strike in 1973-4 caused by the miners' dislike for the Conservatives' policy in power at the time (Edward Heath's Conservative party won the 1970 election). This was part of Heath's introducing a damaging three day week and then a election in 1974 which Labour won. However, these following Labour governments had major problems solving massive industrial unrest, reducing the trade unions' power and also avoiding major splits in the party itself. This destroyed the confidence of both outsiders and the British people in the economy. They also faced rising unemployment, financial instability and inflation. The government was forced to take out a massive loan from the IMF (International Monetary Fund) because of a sudden loss of value of the pound against the US dollar. This was terribly humiliating and was obtainable only on the condition that there be cuts in government spending which made the already existing splits in the Labour Party worse. Finally, there were many failures of the Thatcher government during the 80s. Indeed, there was a decline in the manufacturing industry because of monetarist policies (mainly restricting government debt and leaving non viable industries to fail) ...read more.

Firstly, the Thatcherite view is that between 1953 and 1979, Britain was on the wrong economic path and that the policies used during this period were a mistake. This view also suggests that there were too many nationalizations, too much government spending, not enough interest in modern management techniques, too much government intervention (the "nanny state") and not enough competitiveness. It also argues that the period from 1979 onwards was one of "revival" (change word), that socialism was a mistake and that during that period, Britain finally became competitive. On the other hand, the view of the 'Golden Age' argues that there was, during the post-war period, sustained social and economic progress. It suggests that in the period 1951-73 Britain was more prosperous and had a more equal society and that it had recovered very well from the devastating war. It argues that Thatcherism was a mistake, that these policies created unnecessary divisions in the society and that they greatly damaged the manufacturing industry. Finally, the balanced view supporters think that post-war economy was neither a success nor a failure, but merely a mix of them both with ups and downs. These supporters also think that Mrs Thatcher's reforms may have been necessary but the price paid for them - of social division - was too high. Therefore, although there was poor management between 1951 and 1979, the economy was relatively successful and the policies of Mrs Thatcher could probably have been replaced by some who were to be less costly to society. 3 ...read more.