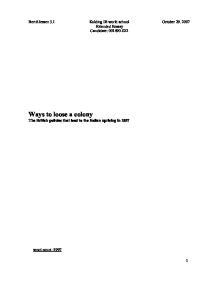 Ways to lose a colony EE

Ways to loose a colony The British policies that lead to the Indian uprising in 1857 word count :3997 Abstract This essay 'Ways to loose a colony' deals the British policies, and actions that caused greviences within the Indian society and eventually lead to the civic uprising in 1857. It aims to identify the cultural drifts, religious insensitivities, and capitalist reforms that had been several centuries underway in the Indian society, and to deduce how they influenced the contemporary Indian society, and mainly, why these factors sparked the malcontent amongst the native population that eventually lead to the Indian conflict of 1857. This paper will also investigate the role of the Honourable East India company's as well as the Crown's motivation behind it's initiatives, in an effort to determine their goals with the new colony, and thereby reasons for possibly overlooking the concerns of the native population. To clarify these matters, the paper briefly presents the situation of colonial competition for the British in the 1600's, and elaborates upon how the Honourable East India company expanded. It also gradually determines the factors that agitated the Indian natives, and how British policies affected the Indian society. The paper covers the effects of the introduction of the Pattern Enfield Rifle, the effects of Christian missionaries and the Doctrine of Lapse, an insight to the life of a sepoy, and gives an insight to the bias the natives where faced from the British. It deliberately leaves out the 1857 conflict as the main focus is the justification for the civil uprising and the validity of greviences with the British company rule. The results provide evidence that, the British lacked consideration for Indian sentiments and traditions, as well as respect for their religion, and show that the British passively were causes of famines through their negotiations with the Kshatriyaer. Word count: 284 Contents Introduction 4 1. Luxury goods from colonies 4 2. ...read more.

English for their riches, which they considered to be at the costs of their own population, much like the case with Jewish peoples of Nazi Germany. This divide amongst the native population, was also part of the reason for why the inevitable uprising, lacked unification across the Indian classes. 5. The Honourable East India company's expansion The Honourable East India company generated great economic returns and because of its success, support for the company increased domestically and their charter was renewed. Around 1670 King Charles 2nd granted several new rights to the company; as the company and thereby the government in India, needed more autonomy because their reliance on the British government in all matters proved a great hassle due to the time consuming decision making process. Envoys had to be sent all the way to England for each issue, so simple diplomatic negotiations could take many months. King Charles 2nd therefore chose to grant the company territorial autonomy, judicial responsibility, and a mandate to go into war, as well as seize them, and the right to coin money on the behalf of the British crown. The latter was symbolic in that the right to coin money, is a quality that only independent governments otherwise have and it sparked a period in which company rule of India gained vastness of power. The swift company expansion can be explained, in part, by the multitude of different cultures in India. India was the home of the Sikh, Muslim and Hindu believers, who frequently experienced clashes. The Muslim Mughal empire had, throughout the sixteenth and the seventeenth century, been rulers of the majority of India. However, according to the Sikh's, their regime had been suppressive in nature, and failed to respect the multitude of the Indian society. Upon their arrival to India, the company found themselves in the midst of several smaller kingdoms, and were thus easily able to gradually infiltrate and take over power in a region. ...read more.

These remaining traditions from ancient times, produced a sense of national identity, in an area which had been under foreign rule of centuries, and which lacked anything but religion to tie the scattered lordships together. The abolition of these practices were to the Indians, an insult of their culture and took away the only concept they had of attaining a nationality. The natives main loyalties were towards their Kshatriyaer, but as their power was undermined by the foreign financial interests, in that the conditions of the population deteriorated due to the demand for cash-crops, they found themselves in disapproval of a system that supported initiatives that lead to their own decline, in quality of life. Additionally the Doctrine of Lapse added to the fears, that they were slowly, to be embedded in the British empire thereby relinquishing any autonomous power. The British had made it clear by their efforts to convert people in their own employment, such as sepoys, that they expected people within their power to streamline within the Christian faith. But the sense of religion was the one concession the Indians where unwilling to make. The Hindu faith in particular was so embedded in basic society, and evident by the caste system, that it deemed impossible to change. The British supposedly attempted to have the sepoys, disregard the faiths, as a secondary priority, with their first priority being their allegiance towards, the state, with the introduction of the Enfield, but miscalculated, and it seems that the main factor that sparked the conflict of 1857 was the demand for religious freedom. This investigation points to no single fact leading to the uprising, but does however pose several new questions, as to why the British continued to follow these policies, and to what extent they were aware of the problems with the Indian peoples, since a large part of their policies seem completely out of touch, in disregarding any Indian rights, or sentiments. ...read more.