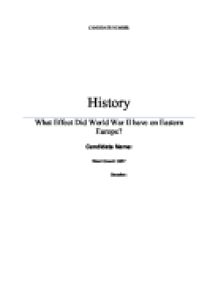 What Effect Did World War II have on Eastern Europe?

However, some of the development has stalled due to the global economic recession16. The highest growth in the country occurred in Bucharest, Romania's capital city. Bucharest is Romania's hub for commerce and finance. Romania joined the European Union of January 1, 2007 and plans to join the Eurozone and adopt the Euro currency by 201417. POLAND POLITICAL ASPECT At the start of World War Two, Poland was invaded by German, Soviet, and Slovakian troops. The Polish armed forces, being outnumbered and poorly equipped, were defeated. Poland was divided and annexed by Germany and the Soviet Union under a secret pact18. The invasion of Poland, many Poles believed, was due to Hitler's plan of eradicating the Polish people and using the land to expand the land available to German people for farming19. Hitler's plan was to wipe out all traces of Poland. Hitler's quote "I have issued the command - and I'll have anybody who utters but one word of criticism executed by a firing squad - that our war aim does not consist in reaching certain lines, but in the physical destruction of the enemy. Accordingly, I have placed my death-head formations in readiness - for the present only in the East - with orders to them to send to death mercilessly and without compassion, men, women, and children of Polish race and language. Only thus shall we gain the living space (Lebensraum) which we need. Who, after all, speaks today of the annihilation of the Armenians?" shows his intentions20. After World War Two, Poland was under the Soviet Union's sphere of influence and was part of the Eastern Bloc. Although the country's elections held in 1947 were supposed to be free, they were actually controlled by the communist party in order to legitimize the party's claim to power. Poland was reorganized using the model of Soviet of socialism21. By the 1980's support for the communist party reached an all-time low. ...read more.

However, the Soviet Economy was inefficient and was one of the factors that led to the fall of the communist government in 1991. After the fall of communism and the dissolution of the Soviet Union, Russia's economy was severely affected and the standard of living of the middle class decreased to levels that had not been seen since the Great Depression45. Russia's transition to a free market economy also created high inflation and a contraction of the gross domestic product by 40%. Some of the contraction of the gross domestic product can be attributed to the discontinuation of the defense spending of the communist party. The eliminated wasteful spending may have given a false sense of economic contraction. Privatization of government owned businesses also took place in the transition toward a free market economy46. Many government operated industries were sold to private tycoons, including much of the defense and military industry. The mass privatization created a wealth gap between the few tycoons and the large masses of population. Today, much of the wealth is concentrated in the hands of few tycoons47. Conclusion World War Two had a long lasting effect on Easter Europe. Overall, the quality of life for the population of the countries of Romania, Poland, and the Soviet Union declined. For the social aspect, personal freedoms decreased during communist rule following World War Two. Economically, the populations of these countries were worse off due to the communist government's taking over of private enterprises. Politically, the basic rights of the people were taken away along with free speech. Any members of the opposition were thrown in prison or killed. It took over 40 years after the end of World War Two for these nations to oust their governments and gain the social, political, and economic freedoms their populations desired. It can be inferred through the knowledge gained and topics explored in this essay that overall, World War Two had a negative impact and hindered the quality of life for the majority of the people living in Romania, Poland, and the Soviet Union. ...read more.