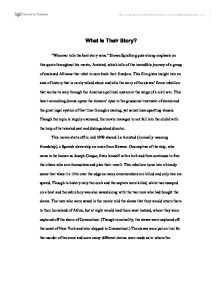 What is their Story?

What Is Their Story? "Whoever tells the best story wins." Steven Spielberg puts strong emphasis on this quote throughout his movie, Amistad, which tells of the incredible journey of a group of enslaved Africans that rebel to earn back their freedom. This film gives insight into an area of history that is rarely talked about and tells the story of the slaves' fierce rebellion that works its way through the American political system at the verge of a civil war. This heart-wrenching drama opens the viewers' eyes to the gruesome treatment of slaves and the great legal system of that time through amazing, yet sometimes upsetting visuals. Though the topic is largely overused, the movie manages to not fall into the clich� with the help of its talented cast and distinguished director. This movie starts off in mid 1839 aboard La Amistad (ironically meaning friendship), a Spanish slave ship on route from Havana. One captive of the ship, who came to be known as Joseph Cinque, frees himself with a bolt and then continues to free the others who arm themselves and plan their revolt. ...read more.

Though the court scenes are not exactly his strong points, his flash backs into Cinque's past create intense emotion and completely justify the harsh cruelty shown toward his captor's in the first scene. His limited use of subtitles also makes the viewers more aware of the situation through the facial expressions and actions of the slaves, rather than their dialogue. What little dialogue Spielberg does supply helps to show just how alike the slaves truly were to their white 'superiors'. Though there aren't really two sides to the slavery issue, Spielberg definitely proves just how horrible the slaves were treated with no righteous cause. He almost immediately has the tone set as the Africans, along with the abolitionists fighting for their freedom each struggle, but show their determination to prove what is just and ultimately succeed. Though Spielberg's story isn't exactly creative, being based on the historical facts of the actual rebellion, he does add his own personal touches which make the film unique and worth watching. ...read more.

It is based in the late 1830's and puts great emphasis on the politics of the era. President Van Buren is hardly talked about but this movie focuses around the end of his reign when he runs for re-election and has a major obstacle thrown in his way. It reveals the power of the presidents but also the balance the American legal system had. Though the movie moves things along much faster than it really took, (the real trial lasted for almost three years) the strong emotions which surrounded it are thoroughly conveyed through the constant threats and mentions of the separated North and South. The great abolitionist movements were also apparent as the controversy over the slaves split the country and broke ties between the slaveholders and abolitionists. Despite its few shortcomings, Amistad was a great historical insight into the horrors of slavery and political matters of the mid 1800's that didn't fall into the boring norm of a documentary. Spielberg's amazing visuals, though gruesome, help to raise awareness and keep viewers entertained. This movie ultimately shows the universal values of freedom and justice. Cites: http://franklaughter.tripod.com/cgi-bin/histprof/misc/amistad.html http://amistad.mysticseaport.org/main/welcome.html http://www.britannica.com/eb/topic-20842/article-9000209 ...read more.