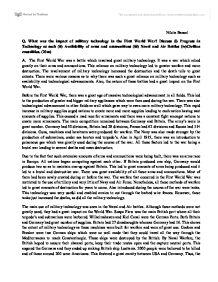 What was the impact of military technology in the First World War? Discuss (i) Progress in Technology as such (ii) Availability of arms and ammunitions (iii) Naval and Air Battles (iv)Civilian causalities

Nonetheless, all these methods of warfare led to great amounts of destruction for years to come. Also introduced during the course of the war were tanks. This technology was very useful and enabled armies to cut through the barbed wire fences. However, these tanks just increased the deaths, as did all the military technology. The main use of military technology was seen in the Naval and Air battles. Although these methods were not greatly used, they had a great impact on the World War. Scapa Flow was the main British port where all their torpedo's and submarines were harbored. Wilhelmshaven and Kiel Canal were the German Ports. Both Britain and Germany had great number of supplies. Britain had 27 dreadnoughts whereas Germany had 16. This shows the extent of military technology as these machines were built for warfare and were of great use. Goeben and Breslav were two German ships which were so well made that they could travel all the way through the Mediterranean to reach Constantinople. ...read more.

Thus, both naval and air warfare caused destruction and killed several people, including innocent lives. Countries were devastated and mass poverty was present. Thus one can see that these military technologies had a negative effect on the people. Many people were left homeless and they lost loved ones. Many countries were ripped apart and there was a great amount of destruction. There were so many battles fought and each battle had so many lives lost. Over all, the total war causalities were about 37 million people. 16 million were killed and 21 million were injured. Both the Allied and the Central powers lost several people. Thus, one can see that even the victors lost great amounts of people-military as well as civilians. The warfare had no positive outcome and military technology although a breakthrough in the field of science and technology only caused great amounts of death and destruction. Thus, one may conclude by saying that the impact that military technology had on the War was negative as it caused great amounts of destruction and death. Many people were killed and there was grief everywhere. ...read more.