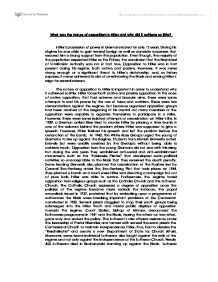 What was the nature of opposition to Hitler and why did it achieve so little?

What was the nature of opposition to Hitler and why did it achieve so little? Hitler's possession of power in Germany lasted for only 12 years. During his r�gime he was able to gain several foreign as well as domestic successes that secured him a strong support from the population. Even though, the majority of the population respected Hitler as the F�hrer, the conclusion that the Nazi ideal of totalitarian authority was not in fact true. Opposition to Hitler was in fact present during his regime, both active and passive. However, it was never strong enough or a significant threat to Hitler's dictatorship and, as history exposes, it never achieved its aim of overthrowing the Nazis and ending Hitler's reign for several reasons. The nature of opposition to Hitler is important in order to understand why it achieved so little. Hitler faced both active and passive opposition. In the case of active opposition, that had extreme and broader aims, there were some attempts to end his power by the use of force and activism. There were few demonstrations against the regime, but because organized opposition groups had been crushed at the beginning of his control not many members of the opposition were capable to organize themselves to participate in a strike. ...read more.

By 1939 for example, 100,000 Germans had seen the interior of a Concentration Camp and were not prepared to face the risk of going back. Consequently, because they were not able to an organized active opposition prepared to challenge the Nazi regime, the achievements of those who bravely stood up were insignificant when compared to the strength of the Nazis. In short, opposition of this kind could only have little impact upon the policies and the overall control of the Nazi regime. For instance, the rising of leading generals following the Stauffenberg Plot was immediately stopped with the arrest and execution of many leading generals and high-ranking civilians, shows that even in 1944, at the verge of defeat, the Nazi rule still maintained a strong grip over domestic opponents. A popular rising was therefore impossible, not only because of fear of the Gestapo, but also because of the establishment of a One Party State following a law that stated that anyone who tried to set up another party would be punished. To make sure the law was followed Hitler had already taken care of all opposing political parties by forcing the small parties out of existence, arresting the communists and making the SPD and KPD illegal parties. ...read more.

Goebbels had persuaded the people that if the Russians won they would summit the people to their regime. Thus, people believed in their F�hrer to get them out of the war victorious. He was responsible for getting them in the war and now he was the only who one who could get them out. Kershaw blames the failure of German resistance to Nazism on the "strife-torn political climate of the Weimar Republic" and the "massive popular readiness to embrace authoritarianism". While the resistance lacked support, the dictatorship's strength relied on consensus. In conclusion, because the nature of opposition to Hitler was basically passive, with a few exceptions of personal bravery, it provided no threat to the policies of the Third Reich in any significant way. This was also due to their failure of creating an organized opposition as well as to Hitler's magnetism and successes which provided him with the strength his regime needed. The policy of coercion followed by the Gestapo was also a main contributor to the failure of the opposition as any attempt of resistance was subsequently followed by a strong action of the Gestapo agents who executed and arrested any possible revolutionary. Nonetheless, what the resistance mainly lacked was popular support to operate and strength to succeed; two factors Hitler's dictatorship controlled. ?? ?? ?? ?? ...read more.