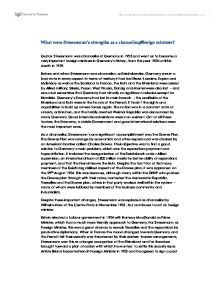 What were Stresemann's Strenghts as chancellor and foreign minsiter?

What were Stresemann's strengths as a chancellor/foreign minister? Gustav Stresemann was chancellor of Germany in 1923 and went on to become a very important foreign ministers in Germany's history; from the year 1924 until his death in 1929. Before and when Stresemann was chancellor, or Reichskanzler, Germany was in a bad state in every aspect: In terms of territory it had lost Elsass-Lorraine, Eupen and Malm�dy as well as the Saarland to France, the Ruhr and the Rheinland were seized by Allied military; Silesia, Posen, West Prussia, Danzig and Memel were also lost - and one must remember that Germany had virtually no significant colonies except for Namibia. Germany's Economy had lost its main branch - the coalfields of the Rheinland and Ruhr were in the hands of the French. ...read more.

Despite the fact that at first many members of the Reichstag disliked aspects of the Dawes plan, it was approved on the 29th August 1924. This was because, although many within the DNVP who pushed the Dawes plan through with their votes, contested the democratic Republic, Versailles and the Dawes plan, others in that party worked well within the system -many of whom were lobbied by members of the business community and Industrialists. Despite these important changes, Stresemann was replaced as chancellor by Wilhelm Marx of the Centre Party in November 1923, but continued to act as foreign minister. Britain elected a Labour government in 1924 with Ramsay MacDonald as Prime Minister, which had a much more friendly approach to Germany. ...read more.

In September 1926 however it was accepted and also made a council member of the league of nations and therefore had the same powers as other council members - bar the military strength, as Germany was excluded from the military responsibilities of the League of Nations Article 16 as to satisfy the Russians, who still doubted that Germany had calmed down. Under Stresemann as Foreign Minister the country was still not politically stable. It's economy and monetary strength were still decreasing. However, the first step to solve all these problems is good international relations in the eyes of most historians. Stresemann was not too great an economist, despite the Dawes plan, and of course as foreign minister he had no great influence on Germany's inner politics. However, he built up Germany's international relations with France and Britain. Germany was now in a much better position through Stresemann's diplomatic excellence, and therefore I rate his one strength of diplomacy very highly. ...read more.