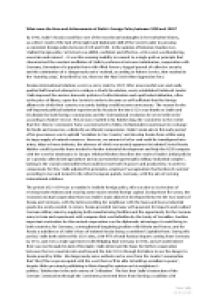 What were the Aims and Achievements of Stalins Foreign Policy between 1928 and 1941?

﻿What were the Aims and Achievements of Stalin?s Foreign Policy between 1928 and 1941? By 1941, Stalin?s Russia would face one of the most brutal onslaughts in her turbulent history, as a direct result of the lack of foresight and diplomatic skill of the Soviet Leader in pursuing a consistent foreign policy between 1928 and 1941. In the opinion of historian Stephen Lee, Stalinist foreign policy ?at its best was skilful, confident and effective, at its worst was blundering, uncertain and ruinous? ? it was this seeming inability to commit to a single path or principle that characterised the constant oscillation of Stalin?s preference between isolationism, cooperation with Germany, formation of a popular front with Allied Powers, dogged pursuit of collective security and the culmination of a ?dangerously naive? outlook, according to Robert Service, that resulted in the ?stunning coup?, described by Lee, that was the Nazi-Soviet Non-Aggression Pact. Russian international relations were in a sorry state by 1928. After unsuccessful wars and easily quelled half-hearted attempts to catalyse a World Revolution, newly established Bolshevik Leader Stalin imposed the austere domestic policies of collectivisation and rapid industrialisation, often at the price of liberty, upon the Soviets in order to become so self-sufficient that the foreign alliances in which their country was sorely lacking would become unnecessary. ...read more.

This type of about-turn movement characterised Stalin?s ability to ?bend like a reed? according to Stephen Lee in order to secure what he thought necessary for Soviet Russia; in order to please his new prospective allies, the ever-flexible Stalin even ordered a reversal in the formerly stringent policies of the Comintern in August 1935. By 1937, it seemed to Stalin that the pro-Allied attitude of his foreign minister Litvinov was having a positive effect as 1934 saw USSR?s entry into the League of Nations and pacts in 1935 with France and Czechoslovakia effectively achieved the aims of Russian foreign policy, on paper. With the formation of an Anti-Comintern pact involving Germany, Japan and Italy also by 1937, a potential war on two fronts loomed before Russia. Their treaty obligations with France and Czechoslovakia therefore assumed significant importance for their national security, because, as Litvinov orated, ?what other guarantees of security are there?? This period marked the change in Russian international attitude as it became more and more dependent on the success of collective security whilst simultaneously becoming acutely aware of its vulnerability from attacks on both borders through the strengthened relationship between Germany and Japan. ...read more.

By 1941 it was apparent that although all foreign policy aims had been pursued purely in the interests of Soviet Russia, it had not been independent of the influence of foreign power but rather wholly decided by it, and the elasticity of Stalin with ‘the power to divide and subdivide himself…depending on circumstances’ according to Service which facilitated this. An alliance was needed by Russia in order to sustain Socialism In One Country, yet to whom and on what conditions was determined by stronger countries, namely Britain and Germany. Stalin himself was too naïve in international politics, in which he only ‘took a sporadic interest’ according to Haslam, to pay close attention to the possible ramifications of the rapidly vacillating foreign policy decisions, decisions that highlighted his indifference as to whom Russia’s ally was as long as there was one, which in turn discouraged countries from negotiating with such an unscrupulous state. Instead, Stalin met his match in Hitler; the European alliance that should have secured Russia instead left it exposed and without anticipation of attack. What should have been the greatest achievement of foreign policy was without a doubt its greatest failure, and Stalin, in the words of Churchill, was ‘the most completely outwitted bungler of the Second World War’. Ciara Lally 09.05.2010 ...read more.