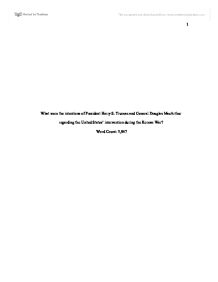 What were the intentions of President Harry S. Truman and General Douglas MacArthur regarding the United States intervention during the Korean War?

a whole for "taking out the Reds"; thus, they consider the statue a "symbol of our alliance with the Americans and a hero who saved our nation from communism" (par. 5). What were the true intentions of the United States' intervention by President Harry S. Truman and General Douglas MacArthur during the Korean War? Did Truman and MacArthur fight on behalf of their personal or national interest or on behalf of Korean citizens? * President Harry S. Truman and General MacArthur as the Saviors North Korean People's Army (KPA) invaded South Korea at four o' clock on June 25, 1950, triggering the Korean War. In contrasting to KPA, which was well armed and organized with tanks and weapons, the ROK Army was poorly equipped and hardly prepared for the war. E.J. Kahn, Jr.'s report in the New Yorker demonstrates the inadequate preparation of the ROK Army: The 96,000 R.O.K [Republic of Korea] soldiers who opposed them were so far from being fully trained that none had ever taken part in any military maneuver more elaborate than a battalion exercise. By July 25, 50,000 of the 96,000 had become battle casualties, and because of the exigencies of the situation at that time, they had to be replaced by men only four or five days removed from civilian life. (Qtd. by Rovere and Schlesinger 112) As Kahn Jr. emphasized in his report, the ROK Army's ability to defend itself from KPA with military aids from the USSR was severely lacking. It was only a matter of time until the South would fell to North Korea if the United Nations - pushed by the United States -- had not helped South Korea. Only four days after KPA's invasion of ROK, President Harry S. Truman sent General Douglas MacArthur as the Commander-in-Chief with all three branches-air force, naval force and land force-of the American military to South Korea. In addition, on October 7, the General Assembly of the United Nations approved a resolution (suggested by the United States) ...read more.

Truman's and MacArthur's personal interests potentially led to the division of Korea. Conclusion Even after the investigation, the question still remains unsolved: What were the intentions of President Harry S. Truman and General Douglas MacArthur regarding the United States' intervention during the Korean War? First and foremost, without the intervention of the United States led Truman and MacArthur, the defeat of South Korea was rather clear, considering the lack of preparation in the beginning of the Korean War. While North Korean People's Army was well-equipped with technology, the Republic of Korea Army possessed no tanks or airplanes. If not for Truman's quick decision to send in US troops under the leadership of MacArthur, much evidence exists that the Democratic People's Republic of Korea (DPRK) would probably have united Korea under communist ideology. MacArthur's great success in the Inchon landing supports this claim. In addition, Truman and MacArthur did try to unify and establish the united, independent Korea. Although President Dwight D. Eisenhower, the successor of Truman, persuaded Syngman Rhee, the President of South Korea, to accept the armistice at the end of the Korean War, the initial intention of the United States on October 7, 1950, in the General Assembly of the United Nations was to unify Korea under a democratic government. It is unfortunate that Korea remains divided and still the Korean War is theoretically continuing, with temporary peace. MacArthur once stated that "there is no substitute for victory." If so, no victory was achieved in the Korean War. In addition, the war crimes that MacArthur conducted and his dogmatic insistence to use atomic bomb in Manchuria, China, and North Korea undermined his intention to truly help the people of Korea. The legacies of the Korean War are hollow: the firm division of North and South Korea, 38th parallel and the temporary, unsecured peace. It is the job of the current young generation of Koreans to seek improved relations between North and South Korea and to appreciate past US intervention despite questionable intentions. ...read more.