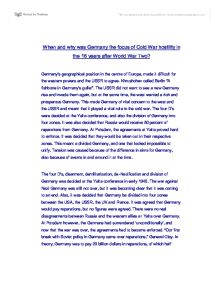 When and why was Germany the focus of Cold War hostility in the 16 years after World War 2?

When and why was Germany the focus of Cold War hostility in the 16 years after World War Two? Germany's geographical position in the centre of Europe, made it difficult for the western powers and the USSR to agree. Khrushchev called Berlin "A fishbone in Germany's gullet". The USSR did not want to see a new Germany rise and invade them again, but at the same time, the west wanted a rich and prosperous Germany. This made Germany of vital concern to the west and the USSR and meant that it played a vital role in the cold war. The four D's were decided at the Yalta conference, and also the division of Germany into four zones. It was also decided that Russia would receive 50 percent of reparations from Germany. At Potsdam, the agreements at Yalta proved hard to enforce. It was decided that they would be taken out in their respective zones. This meant a divided Germany, and one that looked impossible to unify. Tension was caused because of the difference in aims for Germany, also because of events in and around it at the time. The four D's, disarment, demilitarization, de-Nazification and division of Germany was decided at the Yalta conference in early 1945. ...read more.

After the introduction of the new currency, Deutsche Mark, Stalin stopped all supplies into Berlin. After Britain and America made 200 000 flights delivering vital necessities to 2.2 million west Berliners, it became clear that Stalin's gamble had failed. The West were determined not to give up Berlin as emphasised by General Clay. "When Berlin falls, Western Germany will be next. If we withdraw our position in Berlin, Europe is threatened... Communism will run rampant." This blockade deepened the crisis, and the Cold War had reached a new stage. The unification of Germany now seemed impossible because of the sheer mistrust between the USSR and the West. The creation of Bizonia was followed by a Soviet response, the German Democratic Republic. It is interesting that Stalin has chosen the word 'Democratic' when it is clear that Stalin hadn't kept his promise of 'free elections' in Eastern Europe. Stalin's mistrust for the west increased when in 1955, West Germany entered NATO. This was seen as a direct threat to Soviet security. The western powers felt the need to form NATO to assure military aggression against any attacks on members. When West Germany entered NATO, the 14 ministers made a short peace of welcome and said it would strengthen peace in Europe. ...read more.

With pressure from Ulbricht, Khrushchev bowed to his demands and created a barrier between East Germany and West Berlin. It became known as the Berlin Wall. This was a major turning point in the cold war. The Americans complained vigorously about the wall, and at one point confronted Soviet tanks at Checkpoint Charlie. The USA was relieved that there was no war over Berlin. It was clear that Kennedy, who was underestimated by Khrushchev, was determined not to back down. The Berlin wall had the effect of settling the question of Germany and removing it as a key issue in the Cold War. Germany was certainly a key focus of tension in the 16 years after WWII as both countries disagreed over the question of Germany, and it split Europe in two. The main reason is that the west wanted a prosperous Germany, and the East wanted to strip its assets. As this was never settled, Germany stayed divided and tensions grew. Berlin became a major source of tension as if any attack was to be made, it would have occurred through Berlin firstly. The west showed how determined they were to keep their 'island of capitalism in the sea of communism'. The USSR showed how determined they were to match western aggression, by creating the Warsaw Pact, and blockading Berlin. ...read more.