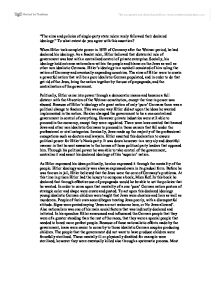 When Hitler took complete power in 1933 of Germany after the Weimar period, he had declared his ideology. As a fascist ruler, Hitler believed that dictatorial rule of government was best with a centralized control of private enterprise

"The aims and policies of single-party state rulers rarely followed their declared ideology." To what extent do you agree with this assertion? When Hitler took complete power in 1933 of Germany after the Weimar period, he had declared his ideology. As a fascist ruler, Hitler believed that dictatorial rule of government was best with a centralized control of private enterprise. Socially, his ideology held extreme nationalism within the people and blame on the Jews as well as other non idealistic Germans. Hitler's ideology in a nutshell consisted of him ruling the nation of Germany and eventually expanding countries. The aims of Hitler were to create a powerful nation that will be a pure idealistic German populated, and in order to do that get rid of the Jews, bring the nation together by the use of propaganda, and the centralization of the government. Politically, Hitler came into power through a democratic means and became a full dictator with the 48 section of the Weimar constitution, except the time in power was abused. ...read more.

Hitler ideology socially was always expressed even in its gradual form. Before he was thrown in jail, Hitler believed that the Jews were the core of Germany's problems. At this time in prison Hitler had the luxury to compose a book, Mien Kef. In this book he declared that through effective use of propaganda would he be able to set the policies that he wanted. In order to come upon that mentality of a one 'pure' German nation posters of strategic color and shape were create and posted. To act upon this declared ideology young idealistic German children were taught that Jews were cheaters and liars as well as murderers. People of their own accord began treating Jews poorly, with a disrespectful attitude. Signs were posted saying 'Jews are not welcome here, or No Jews allowed'. Also nationalism was one of his main social factors that was indirectly declared and initiated. In his speeches Hitler announced and influenced the German people that they were of a greater standing than the rest of the races, that they were a special people that needed to breed more perfect people. ...read more.

Most of the Jews in Germany tried to leave of their own will to avoid the harassment they were receiving. However later on the final solution was implemented, the mass killings of all non idealistic Germans and eventually those caught in the countries taken over by Hitler during World War II. Most Germans did not know that these horrific homicides were taking place. This aim was basically achieved as well it can be said that Hitler did more than just his declared ideology. In conclusion, Hitler as a single-party state ruler did follow his declared ideology. Though some of the declared ideology of Hitler was acted upon, some were done quietly with only government knowledge. For example, the political assassinations as well as the final solution were government implementations that the general public had to knowledge of. Though Hitler did not come out victorious in World War II his aim to create a powerful nation and ultimately succeeded. He also did succeed in branching out his ideology to other neighboring nations and taking over them to become a part of the German nation. Word Count: 873 ...read more.