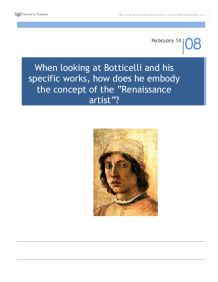 When looking at Botticelli and his specific works, how does he embody the concept of the Renaissance artist?

The Italian Renaissance was driven by a force of great development in humanity. The arousing of the human intellect and individualism mirrored the great evolution in the fine arts. With newfound inspiration and implementation styles, the fine arts of the Renaissance questioned the traditional beliefs and demanding representation of the middle Ages.1 As the first period in history to be aware of its own existence, the Renaissance overpowered previous rules and divulged a revival of the classics. The artists that contributed to the shaping of this artistic society all abided by similar guidelines that distinguished them as Renaissance artists. Sandro Botticelli, through his graceful and idealized interpretation of pagan, portrait, narrative and religious scenes left a permanent mark in art history during this transitional period2. Botticelli doesn't only fit into the characteristics that make a renaissance artist, but also represent them throughout his works of art by conveying a revival of the classical forms originally developed by the ancient Greeks and Romans, an intensified concern with secular life, and interest in humanism and assertion of the importance of the individual. When looking at Botticelli and his particular works such as the Birth of Venus, Primavera and the Adoration of the Magi3, he embodies the concept of the renaissance artist given that he fostered a revival of the Greek and Roman classics, was influenced by a more secular approach, and experienced self- awareness. ...read more.

A more secular approach to science had arose; thus, diverting some attention from the church. The Renaissance had a profound effect on contemporary theology, particularly in the way people perceived the relationship between man and God, this movement was called humanism7. This alteration of belief, allowed artists to surpass their established religious-based limits, and establish their art on a more secular ideal. Sandro Botticelli stands as a model of this new way of thinking. Botticelli started off, as most other artists, making his living out of painting religious scenes, though his interest was far removed from Jesus.8 Although he later appears to have altered his style, when creating the mythological paintings he is so well known for, the Christian root is still present. Some of his paintings such as The Birth of Venus (Figure 1) and Primavera (Figure 4), portray images of pagan deities; thus, revealing Botticelli's secular art. However, it has been suggested that in these mythological paintings, where the pagan story is taken with reverent seriousness, Venus is meant to represent the Virgin Mary in another form9. This theory rightly embodies the Renaissance enlightenment, by which thinking was made more secular, but the church still heavily influenced all art. ...read more.

This portrayal of him in a self-portrait shows how he viewed himself and the grown self-awareness and acceptance, that he was, in fact, an important individual. He also drew another self-portrait (Figure 6), enforcing the idea, that he became aware of how important artists were becoming, and in an attempt of trying to be remembered, he incorporated himself in his art. The Renaissance is perhaps best known for its artistic aspect and the contributions of artists such as Botticelli, who inspired the term "Renaissance artist". The Renaissance period characterized a revival of learning based on classical sources from Greek and Roman background, the secular enlightenment that made society question the validity of certain ideas promoted by the church and the confidence gained by artists when they became aware of their significance. These features are embodied by Botticelli, who was an extremely successful painter at the peak of his career, with a highly individual and graceful style. Through specific techniques and methods, Botticelli is able to convey the art that is considered typical of the Renaissance as well as create a unique way to be remembered. In paintings such as The Birth of Venus, Primavera, and the Adoration of the Magi, Botticelli demonstrates his representation of a renaissance artist by conveying a restoration of the Greek and Roman arts, a more secular approach to his paintings and an individualistic attitude in his art. ...read more.