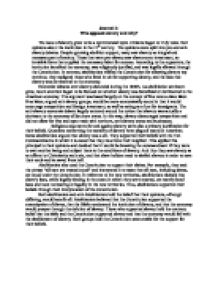 Who opposed slavery in the US and why?

Journal 2: Who opposed slavery and why? The issue of slavery grew to be a controversial topic. Citizens began to truly voice their opinions about the institution in the 17th century. The opinions were split into pro and anti- slavery debates. Despite growing abolition support, many saw slavery as integral and necessary part of society. Those that were pro-slavery saw slaves as an investment, an invisible force that supplied the necessary labor for success. According to the supporters, the institution benefited the economy, was religiously justified, and was legally allowed through the Constitution. In contrast, abolitionists vilified the Constitution for allowing slavery top continue, they maligned those who lived in sin for supporting slavery, and the idea that slavery was detrimental to the economy. ...read more.

The anti-slavery economic debate largely centered around the notion that slavery was actually a detriment to the economy of Southern states. In this way, slavery discouraged competition and did not allow for free and open trade with northern, anti-slavery states and businesses. Religious arguments for and against slavery were also a primary justification for their beliefs. Questions concerning the morality of slavery have plagued many an American. Some abolitionists argued that slavery was a sin. They supported their beliefs with the Ten Commandments in which it is stated that they must love their neighbor. This applied this principal to their opinions and decided that it would be breaking the commandment if they were to own another being and subject them to the conditions of slavery. ...read more.