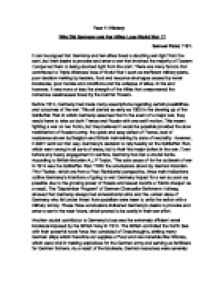 Why did Germany &amp; Her Allies Lose WW1?

Year 11 History Why Did Germany and Her Allies Lose World War 1? Sameer Patel, 1101. It can be argued that Germany and her allies faced a daunting war right from the start, but their desire to provoke and enter a war that involved the majority of Eastern Europe led them to being doomed right from the start. There are many factors that contributed to Triple Alliances' loss of World War I such as inefficient military plans, poor decision making by leaders, food and resource shortages caused by naval blockades, poor morale and conditions and the collapse of allies. In the end however, it was more or less the strength of the Allies that overpowered the numerous weaknesses faced by the Central Powers. Before 1914, Germany had made many assumptions regarding certain possibilities and outcomes of the war. This all started as early as 1905 in the drawing up of the Schlieffen Plan in which Germany assumed that in the event of a major war, they would have to take out both France and Russia with one swift motion. This meant fighting a war on two fronts, but they believed it would be possible provided the slow mobilization of Russia's army, the quick and easy defeat of France, lack of resistance shown by Belgium and Britain maintaining its state of neutrality. ...read more.

Back home, there was increased pressure on the Kaiser to end the war because there were simply too many people dying of starvation. Germany attempted to counter attack British naval supremacy and the crippling effects of the blockade in particular with the introduction of their 'U-Boats' or Submarines. The German Naval Command adopted a policy of 'unrestricted submarine warfare' in order to starve the British of their supplies. The Allied Naval blockade effectively meant that Germany could only import goods from conquered countries. Britain, on the other hand, could import goods from a worldwide market, and of course, many goods were lost due to U-boat activity. With the help of U-Boats, Britain came close to running out of stocks of vital material, including food at one point. However, the introduction of the convoy system for merchant ships with naval escort overcame the effectiveness of the U-boats. Overall, the effectiveness of the British blockade was superior to that of Germany and had a serious impact on the German home front and its forces. When the German troops broke through the British lines in 1918 they were dismayed to see the quality and quantity of British equipment and food that they captured. ...read more.

On the other hand, General Ludendorff constantly looked for scapegoats and appeared indecisive when it came to making crucial decisions that could have saved Germany's war effort. After all, Ludendorff was the one who gave in to the Kaiser and was faced with the task of convincing the Kaiser that the war was all but lost by 1918. Therefore in conclusion, the most crucial and decisive factors that sealed Germany's defeat in the war was the failure of the Schlieffen Plan, the extremely efficient naval blockade imposed by Britain, USA's entry into the war triggered by the sinking of the Lusitania and the issuing of the Zimmerman Telegram, the collapse of Germany's allies and the inability of her leaders to make crucial decisions. In the end, the Allies simply had more man power, resources and ability to force their opponent into a state of heavy defeat. Germany's military plans had backfired and her allies had failed to support her right to the end. Poor morale and conditions had also led German troops into giving up hope in a war of attrition. These factors contribute to the fact that the various collective strengths of the Allies were crucial in overpowering the weaknesses faced by the Central Powers. ...read more.