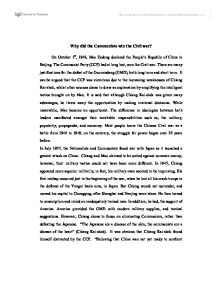 Why did the Communists win the Civil war?

Why did the Communists win the Civil war? On October 1st, 1949, Mao Zedong declared the People's Republic of China in Beijing. The Communist Party (CCP) had at long last, won the Civil war. There are many justifications for the defeat of the Guomindang (GMD), both long term and short term. It can be argued that the CCP was victorious due to the increasing weaknesses of Chiang Kai-shek, whilst other sources chose to draw an explanation by amplifying the intelligent tactics brought on by Mao. It is said that although Chiang Kai-shek was given many advantages, he threw away the opportunities by making irrational decisions. While meanwhile, Mao became an opportunist. The difference in ideologies between both leaders manifested amongst their inevitable responsibilities such as, the military, popularity, propaganda, and economy. Most people know the Chinese Civil war as a battle from 1946 to 1949; on the contrary, the struggle for power began over 20 years before. In July 1937, the Nationalists and Communists faced war with Japan as it launched a general attack on China. Chiang and Mao claimed to be united against common enemy; however, their military tactics could not have been more different. ...read more.

(Edgar Snow,1936). The soldiers were also well disciplined due to the strict reinforcement of the Eight Rules. Moreover, Mao adopted guerrilla tactics, a more effective way of fighting when against a large scaled enemy. A prominent reason for the CCP's success in the Civil War, was their rapidly increasing popularity. Mao and the Communists had the support of the peasants, which was 90% of the population of China, and therefore its core. Mao catered his decisions and choices to aid the peasants, and he made sure they took note. "This great mass of poor peasants are the backbone...heroes who have performed the great revolutionary task which for long years was left undone. Leadership by the poor peasants is absolutely necessary...To deny their role is to deny the revolution. To attack them is to attack the revolution." (Mao Zedong, 'Selected Works', 1927). Mao established the Eight Rules, the code of conduct for the Red Army, which ensured well-behaved soldiers, and no mistreatment of the peasants. Militarily, everyone was seen as equal. "From the highest commander down to the rank and file these man ate and dressed alike" (Edgar snow, 1936). ...read more.

Unlike the GMD, the CCP knew how to manage their money. The CCP's funds were limited; thus they were as careful as possible with it. Instead of buying military supplies, they became self-sufficient, and successfully produced cannons out of elm logs, and landmines out of tin cans, and teapots. Moreover, land reforms reduced the taxes of the peasants, coupled with gaining popularity amongst them. Corruption within the CCP government was rare. On October 1st, 1949, a 20 year prolonged struggle for power had finally come to an end, Mao Zedong and the Communist Party had won. In retrospect, it seems that as early as 1946, the success of the CCP was inevitable. The Communist had an effective guerrilla war tactic performed by enthusiastic devoted soldiers. They had the peasants, the vast majority of China, in their favor. Their clever leader had an inspirational way with words, and they handled their money with thought. Their opponents, the GMD, lacked care and patience when it came to their military. They wooed the wrong audience when popularity and propaganda called. Furthermore, they managed their finances with the utmost nativity. The outcome of the Civil war was foreseeable due to Mao and the CCP's intelligence, perseverance, and determination. "We have stood up." (Mao Zedong, October, 1949). ...read more.