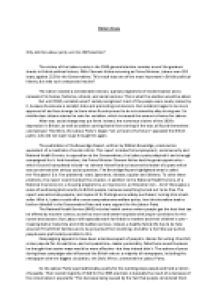 Why did the Labour party win the 1945 election?

﻿History Essay Why did the Labour party win the 1945 election? The victory of the Labour party in the 1945 general election remains one of the greatest shocks in British political history. With Clement Attlee returning as Prime Minister, Labour won 393 seats, against 213 for the Conservatives. This result was one of the most important in British political history; but why such unexpected results? The nation needed a considerable revision, a great programme of modernisation and a renewal of its homes, factories, schools, and social services. This is what the election would be about. But until 1945, socialism wasn?t widely recognised: most of the people were nearly scared by it, because Russia was a socialist state and promoting communism. But socialism began to be more approved of and less strange to them when Russia proved to be a trustworthy alley during war. ...read more.

The Beveridge Report highlighted what is called the ?five giants? (i.e. five problems): want, ignorance, disease, squalor and idleness. To solve these problems, the report recommended the creation, in addition to the National Health Service, of a National Insurance Act, a housing programme, an Injuries Act, an Education Act... All of these gave a sense of well-being and security to British people, because everything turned out to be free. The report was extremely popular, and copies of its findings were widely purchased, turning into a best-seller. With it, Labour could offer a new comprehensive welfare policy. And this therefore lead to further disbelief in the Conservative Party and more support for the Labour Party. The National Health Service (NHS) includes health centres where people get the best that can be offered by modern science, as well as more and better hospitals with proper conditions for the nurses and doctors. ...read more.

So the Labour Party was traditionally a party for the working-class people and held a notion of equality. Their overall majority of 146 for the 1945 elections is basically the result of a decrease of the conservatives? popularity ?this decrease being caused by the fact that people considered them responsible of the 1930s depression and miseries. The Labour Party promised what people wanted: jobs for everyone, new houses and National Health Service. This party was more specific about the social reforms they proposed and seriously approved the Beveridge Report. Moreover, it was supported by the trade union and the press, while the Conservative Party wasn?t properly prepared to fight a general election campaign. Finally, the leading figures in the Labour Party were experienced, respected and well-known personalities, who didn?t scare middle-class voters. The electorate voted for significant change and a new approach to reconstruction in post-war Britain. ...read more.